Really spectacular views from the summit of Red Hill (1641m), climbed via the Porter River. Not a long walk but off-track and a bit slow going in deep snow.

This tramp up to the summit of Red Hill via the Porter River was our first totally off-track walk, and also our first walk in snow from start to finish. The increasingly deep snow made it hard work for a while, until the climb up to alpine elevations thinned out the vegetation. But the really spectacular views from the summit of Red Hill (1641m) made it all worthwhile, with Lake Coleridge to the west surrounded by numerous mountains popping up out of the otherwise flat plains, and to the east and south east were snowy peaks galore. The Canterbury Plains are also visible, although covered by a cloud inversion on the day we did it.

I first read about the walk in Wilderness Magazine, and that author waxed lyrical about the upper sections of the Porter River Valley in the first half of the walk. It was nice, but a bit of a slog walking through it in snow, and I think most walkers will find the views from high ground are the highlight. Track notes at the end.

A video of the 360 degree views from the summit… 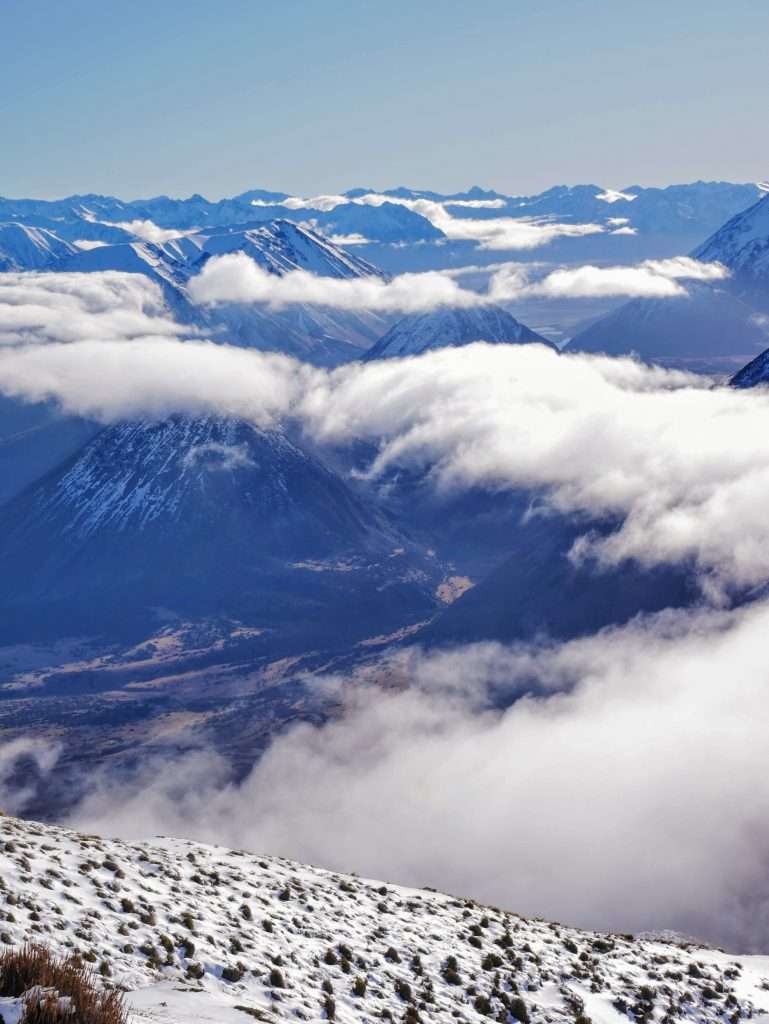 This walk was entirely off track, or at least no track was discernible due to snow. The start point is at 950m, but is before the steep climb to the nearby Porters Ski Field, so you probably won’t need chains.

From a lay by opposite the lodges and cafe follow the Porter River (just a stream here) upstream. We kept to the true left (right as you walk up it). For a while we kept quite near to the stream, but chose to drift away from it to slightly higher ground as the walking seemed easier going in the snow. Nevertheless, increasingly deep snow made it slow going for a while. At one point I managed to step right through snow into a pool of cold water, filling up my left boot before I realised what was happening. Don’t do that.

Near Coleridge Pass saddle take a spur up towards the summit, eventually joining a ridge for the final climb. Other track notes I read suggested crampons might be required on this climb, but the snow was crunchy when we did it. Return the way you came.

We were quite slow walking through the snow, and I think allocate a full day in winter. Navigation is easy along the river, however it might be harder on the climb to the summit depending on the weather. 700m change in elevation and about 9km return.