I review a year’s hiking in New Zealand post-Covid lockdown, a year in which I did 72 full sized day-hikes, 68 of them new to me. 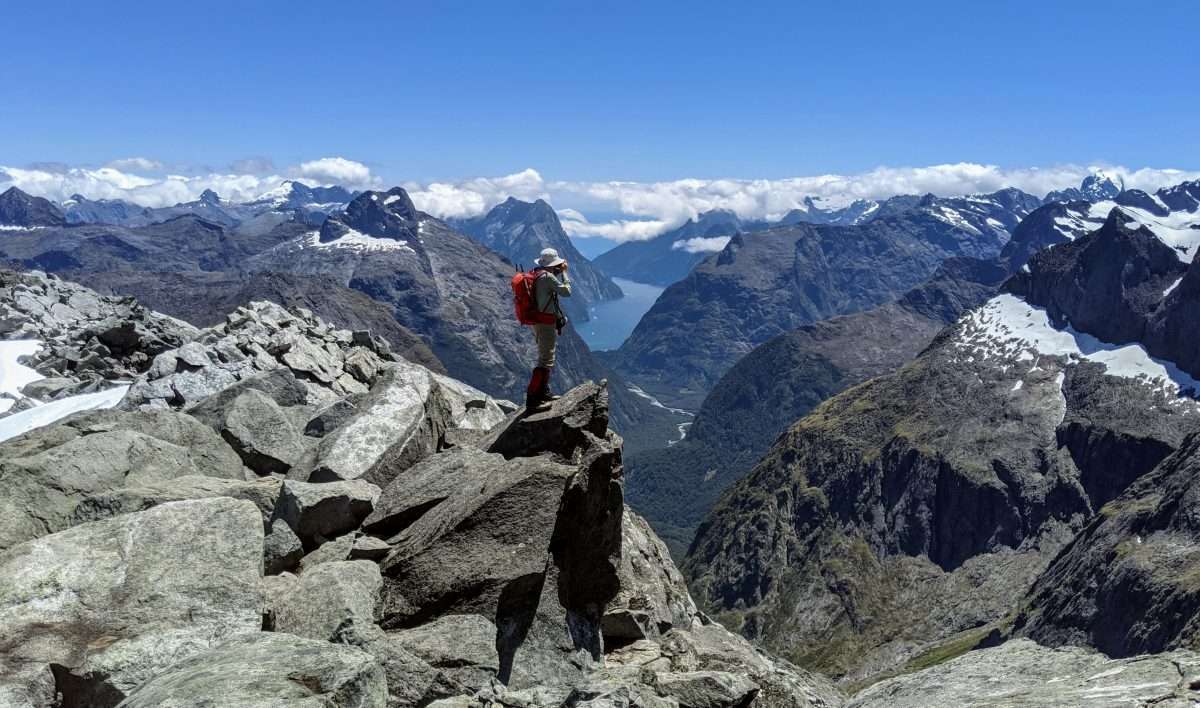 In the year since the first New Zealand Covid-19 lockdown ended in late April 2020 I completed 72 hikes (“tramps” in the NZ vernacular), and fifteen shorter walks. Of the 72 hikes 68 were new to me (I had done one before, and I repeated just three). I will explain how I came to do so many walks in a moment. But first, and in order to show off a bit, I will regale you with a few statistics:

Why So Much Hiking?

I’ve lived most of my life in Australia, but after falling in love with New Zealand’s mountainous terrain on numerous holidays, my wife Sophia and I decided to move here in 2020. We were always going to do a lot of tramping, but for quite a few months it felt like we were on an extended holiday. On our holidays in New Zealand we’d squeeze in as many hikes as possible, so we continued in that vein.

Eleven days after we arrived in New Zealand the country entered the strictest Covid lockdown in the world at that time. We were on holiday in Queenstown, intending to do lots of walks before I started my new job in Christchurch three weeks later. The lockdown meant we couldn’t go hiking, which was disappointing to put it mildly.

So when the lockdown ended and we were able to go tramping again, I was making up for lost time. And I don’t doubt that an element of cabin fever contributed to the feverish commitment to tramping that followed. Perhaps also the possibility that at any time we could go back into lockdown. The fact that we never did means we packed in more hikes than at any other time in our lives.

We had planned to just turn up and travel a bit first, then look for work. (Australians are lucky to have working rights in NZ). But I ended up getting work in Christchurch before we arrived in New Zealand.

As the biggest city on the mountainous South Island Christchurch was always high on our list as a place to live. But after arriving here I realised you could get to an almost unlimited supply of mountains in about one to two hours’ drive, so it exceeded expectations.

Certainly there are towns on the South Island that are closer to the mountains, Queenstown being the most notable, but I can’t image there are many cities in the world offering such great opportunities for hiking as Christchurch. You just have to get used to driving maybe 80-120km over the flat as a pancake Canterbury Plains to reach the mountains. It’s not too bad actually – quite meditative as the roads are so straight you barely have to use the steering wheel.

Not Having Friends 🙁 & Working Part-time

Sophia and I have met some nice people since coming to New Zealand, however we knew nobody in Christchurch when we first arrived. And of course nobody could visit us from overseas. On top of that we both chose to work part-time (me 4 days per week) in order to get into the great outdoors more often. So we’ve had plenty of time to climb mountains!

This map contains all of my NZ walks, not just those done in the year post 2020 lockdown. You can click on the walk icons to view the original blog posts.

Many of our walks this year were in the Canterbury Foothills, Arthur’s Pass National Park and the Lewis Pass region. These are all between 1 to 2.5 hours’ drive inland of Christchurch.

The Canterbury Foothills, mountains east of the so called Main Divide (Southern Alps), include some good sized peaks, the highest being Mt Taylor at 2333m. There’s lots of them, and many can be climbed off-track because of the open vegetation. This means there are a lot of ‘choose your own adventure’ tramps to be done.

Many of these mountains are covered in tussock grass and scree slopes, although some have areas of native forests on the lower slopes. We don’t have scree in Australia so I find this look quite exotic. The foothills are easily accessed from Christchurch, driving west over the Canterbury Plains, or north towards Hanmer Springs.

These are two very scenic areas in Canterbury that also extend into the West Coast region. The scenery is lusher than the Canterbury Foothills further east, so there is usually a forest to climb through on your way up from deep valleys to rugged peaks. Very nice walking.

We did a handful of walks in the Port Hills on the edge of Christchurch, and on the Banks Peninsula, a volcanic peninsula just to the east of Christchurch. This environment has been greatly altered by farming, but some areas are now protected and regenerating in nature reserves. And the coastal topography is very attractive.

We have done many walks in the past from our holiday base in Kelvin Heights near Queenstown. In the last year we’ve been back a couple of times, doing a bunch of new walks and repeating a couple of the shorter ones. The scenery in this region is varied, ranging from some of the most dramatic peaks, lakes and valleys, to more subtle but atmospheric domed and tussock clad hills.

Elsewhere on the South Island

We also did a smattering of tramps in the Mackenzie District of Canterbury, in Fiordland, the West Coast, and one at Kaikoura on the coast north of Christchurch. The Mackenzie District provides access to Aoraki Mount Cook national Park and New Zealand’s highest and most dramatic peaks. Fiordland is certainly one of New Zealand’s most scenic areas, and although we’d visited once before years ago, this was our first time walking there. Really fabulous views on offer. It was our first time visiting the West Coast and this was also very scenic, containing lush rainforest, mountains peaks, glaciers and attractive coastline. And it was also our first time to visit Kaikoura in northern Canterbury, an area famous for high mountains bordering the sea.

Usually I would have trouble picking a favourite tramp, as each new one I do seems to out-do the last. And in terms of walking experience I am still undecided. But the best views were on the tramp to Barrier Knob via Gertrude Saddle in Fiordland. If it weren’t so popular then it would also have been the best walking experience.

What’s Next For My Tramping?

Firstly, I don’t think I will repeat anything like this again.

I’ll admit that in the last two to three months I began thinking about how many hikes I’d done, and started peak bagging just a bit. This actually detracted from the experience. Now that the twelve months is up I will settle down and probably tramp a bit less often. I look forward to doing more new tramps, but also repeating a bunch in different seasons and weather conditions. I also want to start overnighting so that I can extend my range and see more remote places. And I plan to do a basic alpine skills course to improve my confidence (and safety) climbing mountains in the winter.

Looking Through My Walks

Here’s a list of these 72 tramps plus 15 short walks (best viewed on a larger screen, not so good on a phone).

If you want to browse through a list of all my New Zealand walks then go and see my region summary for New Zealand, or use the interactive map further up in this article. You can also have a look through my photo galleries of the scenery in parts of New Zealand I’ve done my walking (all South Island). And you might also like to look through my list of featured walks, which generally have the best scenery.

I have walked a lot in Australia as well of course, particularly in Sydney and Regional NSW, but also quite a few in Tasmania, and some good ones in Victoria. With the so called travel bubble opened up between Australia and New Zealand in April 2021 we can now visit each other’s wild places! And hopefully the world will return to normal in the not too distant future, so people from further afield might like to start planning their next hiking holiday down under 🙂

8 thoughts on “My Epic Year of Hiking in New Zealand”