Excellent scenery on this walk taking in two of Australia’s highest peaks, and two of its alpine lakes, including the spectacular Blue Lake.

On this walk high up on the Main Range I visited Australia’s third highest peak for the first time, Mt Twynam at 2196m of elevation, it’s sibling Little Twynam (2130m), the spectacular Blue Lake, and nearby Hedley Tarn. There’s excellent alpine scenery the whole way, and with the possible exception of the justifiably popular Blue Lake, you’ll avoid the worst of the crowds that frequent the southern area of the range near Mt Kosciuszko.

When I did this walk I had in fact planned to visit The Sentinel rather than the lakes, but the mist closed in and wind picked up so that wouldn’t have been either safe or worth the effort. (I got to Mount Sentinel just 8 months later on a clear, albeit smokey day).  When I walked down to Blue Lake, which I had visited once before when walking the Main Range Track, it was still pretty misty. But the mist cleared and revealed the rather spectacular cliffs and hillsides on the opposite side of the lake: I was most impressed. Somehow I hadn’t been so impressed on my first visit, perhaps because it was a cloudless day and the sun would have left the cliffs in shadow. It’s also worth continuing on past the small lookout to the lake shore, because you get a better sense of scale. You can also now see some more pics of the lake on my trip report for Mount Sentinel.

As a result of my diversions to Sentinel Peak my route to the peaks and lakes in this walk was not the most direct, and so the scenery you’ll come across will differ a little depending on the route you choose. Having said that, most of the indirect bits were in thick mist so I’m not even sure what it looks like in those areas. Check out my track notes (at the end) for the description of my circuitous route. 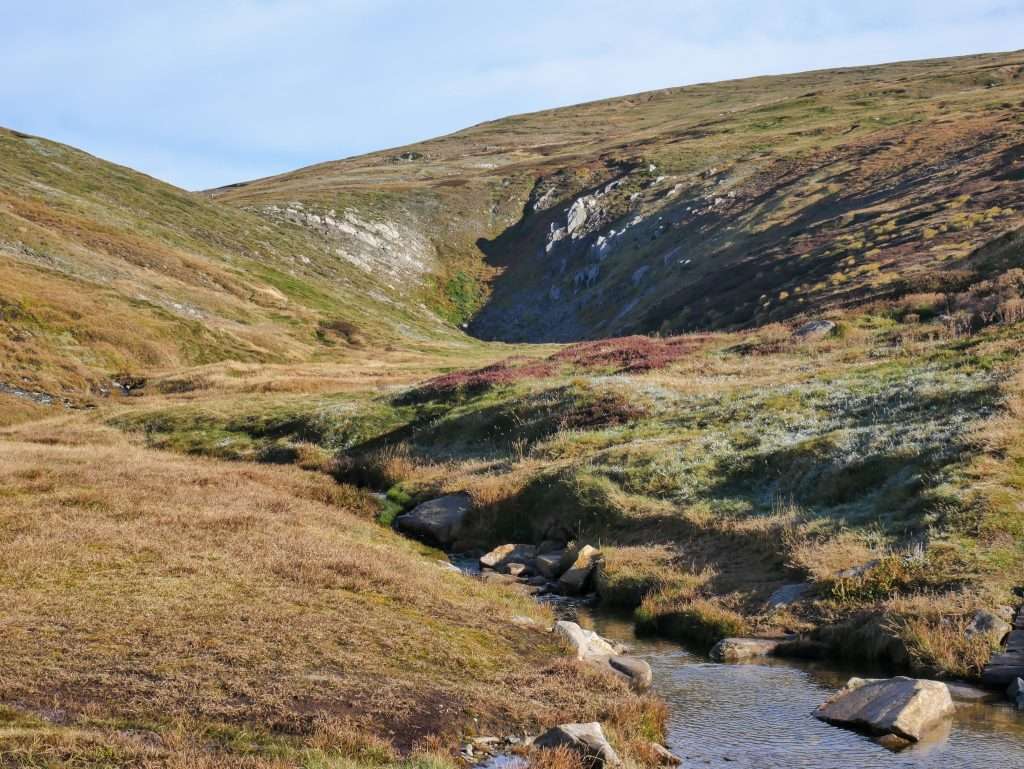 I started this walk at the end of Kosciuszko Road at Charlotte Pass. If it’s a long weekend you’ll want to get there early to find a decent roadside parking spot. It’s also possible to walk to Mt Twynam from Guthega.

From Charlotte Pass I took the Main Range Track as far as the saddle below Carruthers Peak, then took the right hand option to check out The Sentinel. That was disappearing in mist as I approached, so I continued along this fire trail in low visibility to near the summit of Mt Twynam. To get to the summit I took an old indistinct vehicle trail to the east (right), then as this disappeared continued east and upward to reach the summit of Mt Twynam. I managed this in low visibility so it’s not too hard, but you’ll benefit from a compass in these conditions. I was lucky to meet two runners coming down the indistinct trail, otherwise I would have just continued merrily on the main fire trail. (In good visibility you can see the summit marker so it’s not an issue).

From Mt Twynam I walked south-east down to the rocky summit of Little Twynam, where I took lots of pictures as the visibility was better.

After visiting the Twynams I wanted to go back to The Sentinel again in case the weather had cleared, so I retraced my steps. If you want to visit Blue Lake and Hedley Tarn from Little Twynam you can walk there easily enough off track (roughly south west), although the alpine plants will love it if you don’t. And don’t fall off any cliffs if you try and walk there directly from Mt Twynam.