Lots of scrambling, exposure and tricky route finding on the way up Mt Hanley from Moke Lake, along Williamson Spur.

On a previous occasion we’d set off for Mt Hanley and made it only part way up Williamson Spur, turning back in less than ideal weather. There was already some scrambling and exposure going that far, but climbing all the way to the summit involved quite a bit more, and ended up being the scariest walk I’ve done to date! It didn’t help that my wife Sophia pulled out that morning and I went by myself. I probably shouldn’t have. This walk is best done with somebody else, and anybody who tries it will need to be comfortable with scrambling and exposure. The views are good, particularly when there are shadows highlighting the many ridges on the surrounding hillsides (which I didn’t really have in mid summer).

I took nice pics in interesting weather conditions on our previous walk part-way up Williamson Spur. Have a look at those here. 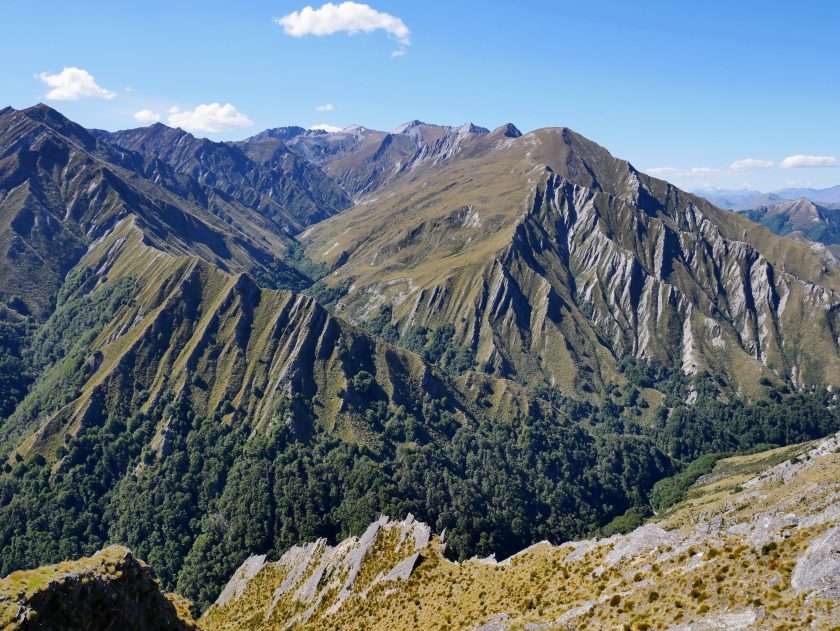 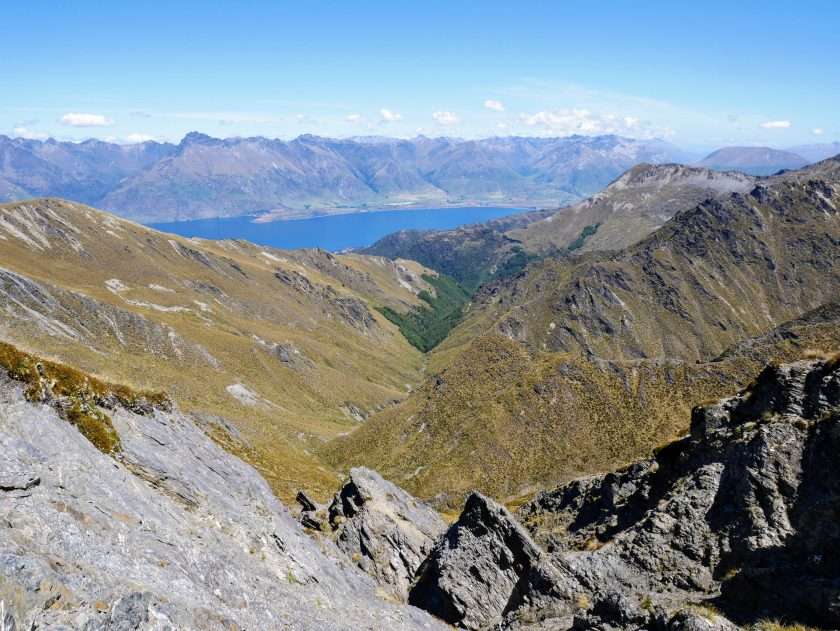 This is quite a difficult route. You start on the Moke Lake Loop Track and climb up onto Williamson Spur on the now obvious impact track that leads to the ‘secret’ viewpoint of the lake at about 780m of elevation. From there you will have to scramble up the spur and there are some spots with significant exposure. The walking gets easier for a while from the ‘a’ in ‘Williamson’ on the topo map, but there’s more scrambling and tricky route finding closer to the summit.

Route finding was difficult on the way up, but on the way down I lost count of the times I stood at the edge of a rocky precipice and thought, ‘how the fcuk did I get up here?’. This was followed by me considering various options and saying to each – ‘surely not’. Only when one of those options became a ‘well, maybe’ did I proceed. About two thirds of the way back I took the opportunity to head down the side of the mountain on steep vegetated slopes just to avoid the remaining down climbing – I’d had enough by then. This spot is near the ‘s’ in ‘Williamson’ on the topo map. The route here is to find your own way down to the track by the lake, heading for open grassy sections near the bottom to avoid scrub.

It’s pretty slow going about half of the time, so allocate maybe 9-10 hours for this walk to be on the safe side. It might be quicker with two people due to the added confidence you get from having company.