Mt Binser had been recommended by a mountaineering neighbour of ours as a walk with great views and a bit of bush bashing to add to a sense of adventure. My wife Sophia rated the views as possibly the best we’d seen since arriving in NZ seven months earlier, which was a big call considering the quality of walks we’d done in that time. The views were spectacular though, taking in two river valleys, including views right up the Waimakariri River, countless peaks in every direction, many of them now familiar to us from other walks, and the rugged bare slopes of Mt Binser itself.

To get these views you have a fair physical challenge, including roughly 30 minutes untracked through forest, and then a steep ascent to the first of three peaks; there’s about 1500m of ascent and descent all up. There’s also steep scree slopes to negotiate once up on the tops, but in good weather it was all very doable and so I can highly recommend this walk for the moderately fit and experienced.

These shots from the summit… 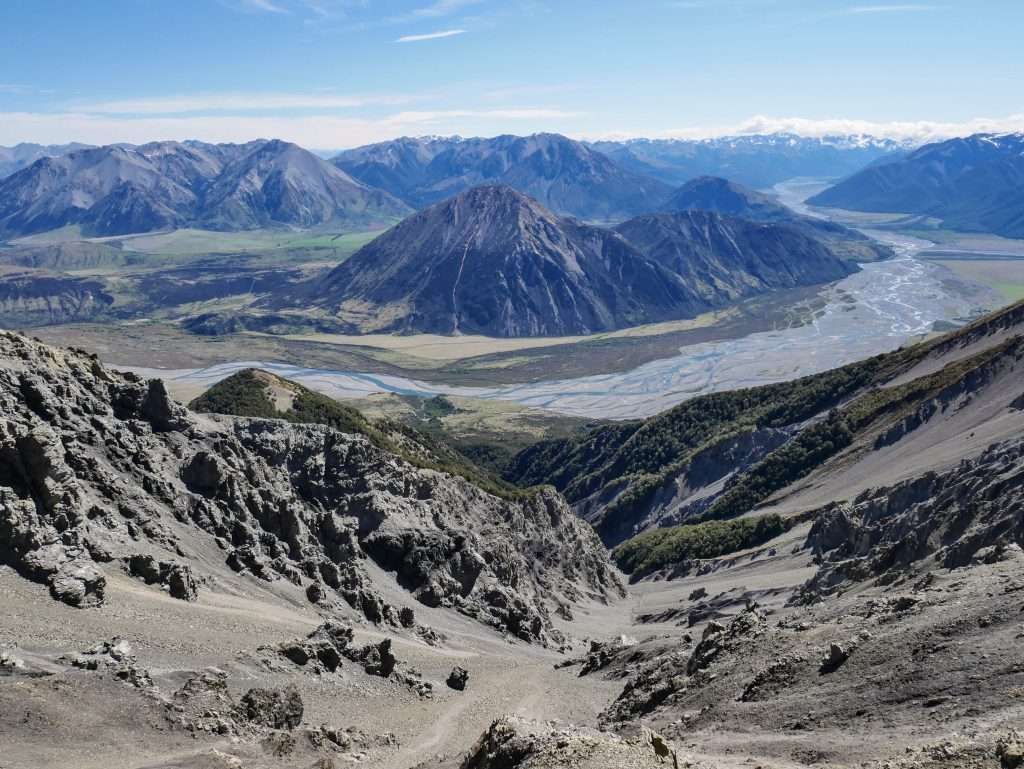 The start of the Binser Saddle Track is off Mt White Road shortly after a shallow ford. I noticed one car parked just before the ford, so perhaps they didn’t want to take their 2wd car over the stream. In this case you would have to walk over the stream and along a vehicle track  for about 800m to the start.

The route is on a formed track as far as Binser Saddle, then after entering a clearing turn right into the forest at a point of your choosing; we chose a spot right at the end of the clearing. This initial section of forest is dense and will involve maybe 10 minutes of twigs in the face and climbing over dead trees etc. Soon enough the forest thins and travel is easier, but the slope steepens. As you head due south you will probably hear a stream in a gully to your left (east), and you can keep this nearby as you head up towards the bushline. (This will help you find your way back on the way down).

It’s then a steep climb through shingle, tussock and speargrass to the low peak (1753m). The views are great from here on in as you travel along a ridge to the middle peak (1831m), passing a section of narrow ridge flanked by steep scree slopes, and also involving a steep descent and ascent. (Sophia was intimidated by this section, but it was safe enough). Then from the middle peak it’s a short descent to a saddle before arriving at the summit of Mt Binser (1860m).

Return the way you came or you can also descend steeply via a spur to the south-west and then back along the road.