An epic 3-4 day circuit in Mt Aspiring National Park, visiting Lake Nerine and sampling some of NZ’s best scenery along the way. 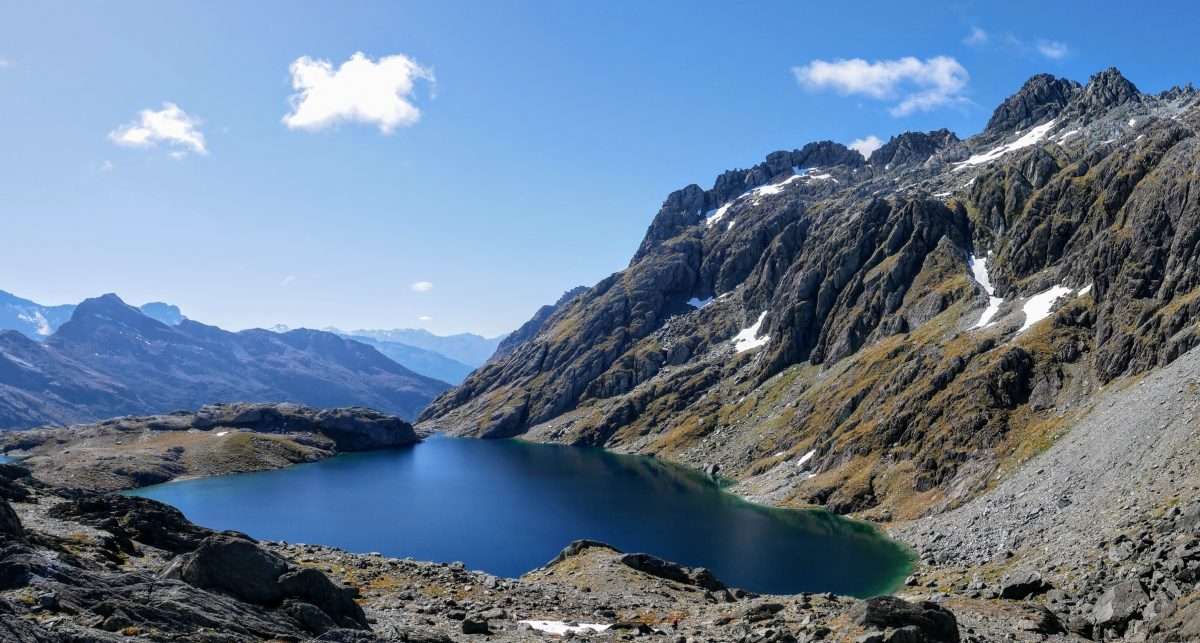 This three to four-day circuit walk visiting Lake Nerine was our best and hardest walk to date. The route passes through unspoilt wilderness on the western side of Mt Aspiring National Park bordering Fiordland. You bag two beautiful valleys – the Routeburn / Routeburn North Branch and the Rockburn;  three mountain passes – North Col, Parks Pass and Sugarloaf Pass; and walk under the towering Humboldt Mountains pretty much the whole way. And then there’s a multitude of tarns and lakes with Lake Nerine the jewel in the crown.

The hard part is route finding, and for a while bush bashing and scrambling up and around boulders. This was particularly difficult between North Col and the narrowing in the Routeburn North Branch. For me, the epic scenery fuelled enough adrenaline to keep me going for about 30 hours of walking (and scrambling) over the three days, and I didn’t feel all that tired at the end. Nevertheless, on the final day I was happy to forego epic scenery for a decent track and quick progress just to get us home!

For those with extra time and energy there are a couple of worthy side trips that we didn’t do – climbing Nereus peak from North Col, and visiting Park Glacier Lake from Park Pass. And in the past I’ve made a short side trip from Sugarloaf Pass for extra views of the area.

Route notes at the end.

First a few shots from a day walk up the Routeburn North Branch. More shots in the original post, and of course I took shots on the Routeburn Track to Routeburn Flats on previous occasions as well – see those shots here. 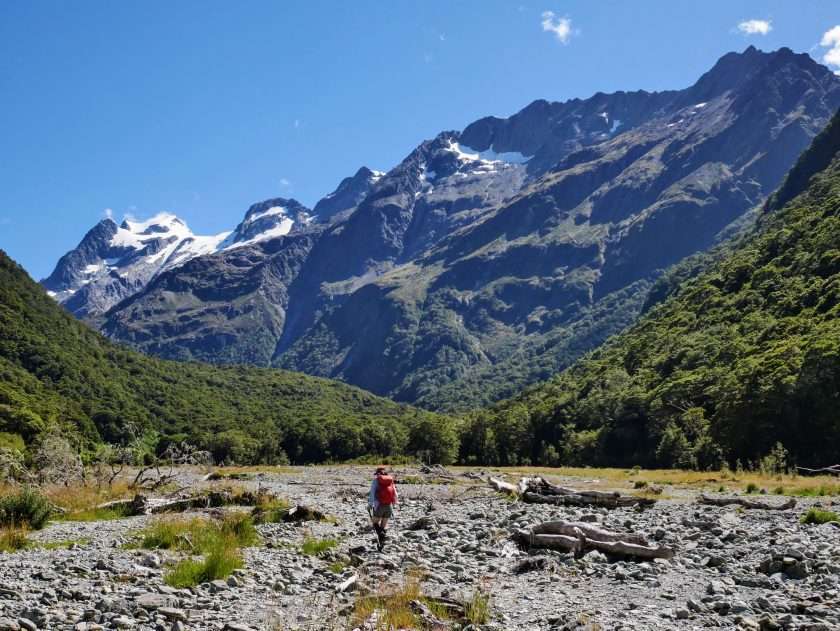 Things get more challenging as you progress up the valley, but still very scenic. 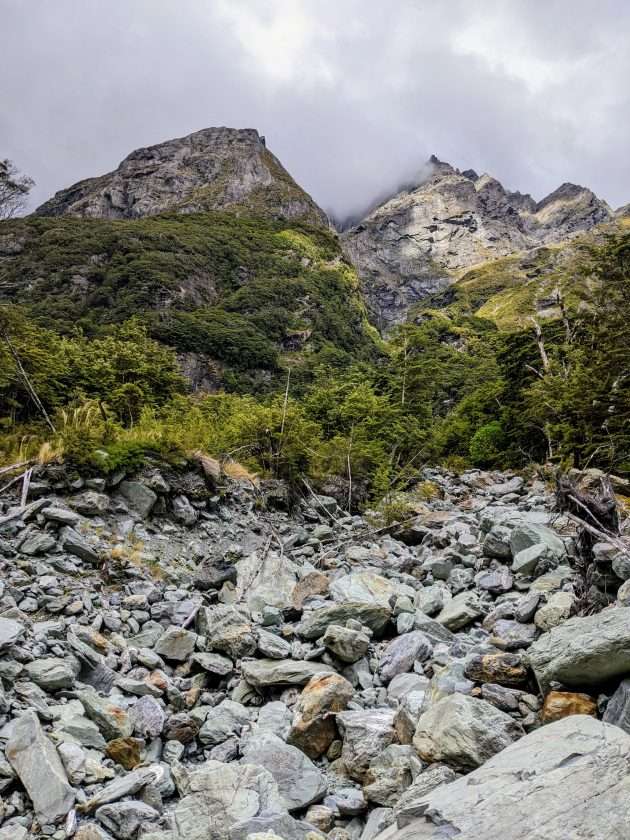 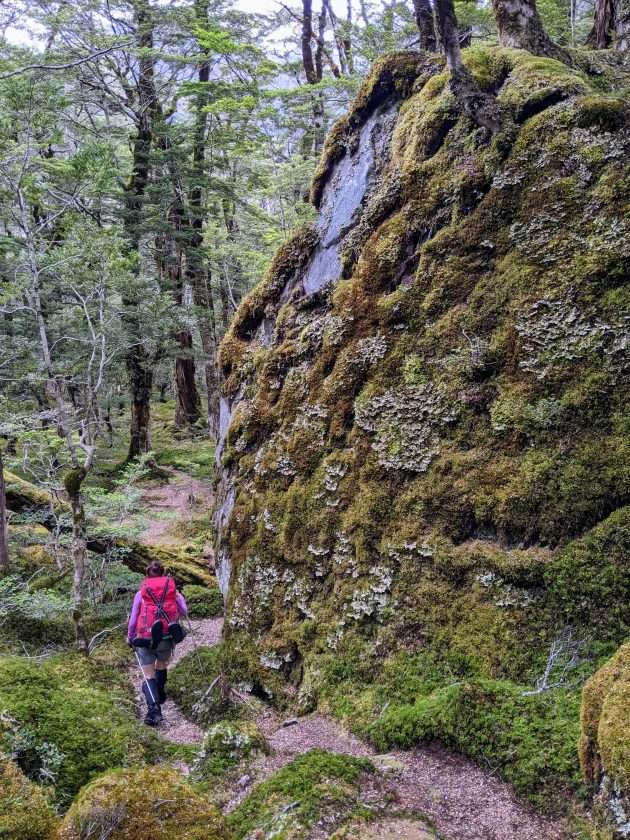 Two shots from other times up at Sugarloaf Pass.

We walked this route clockwise over three days from 28/12 to 30/12. I think some will prefer to take four. On day one my wife wished we had allocated more time! I’ve seen the distance estimated as 40-44km, but it will be the terrain that might challenge you, rather than the distance. Another blogger estimated 2700m of ascent and descent. I’m too lazy to verify this so lets just go with it. 🙂

From the Routeburn Shelter you’ll make quick progress on the Routeburn Track and Routeburn North Branch Track until the narrowing in that valley. About four hours to this point and perhaps time to have lunch.

From here there’s a pretty arduous combination of bush bashing and scrambling almost all the way to North Col. We made very slow progress here – less than 1km/hr. The first challenge is navigating through boulders and bush. You can follow blue tape trap markers for a while through waterlogged ground. At some point you should cross over the Routeburn North Branch to the ‘true left’ (left as you look downstream). There is a big mossy cairn at the point the valley narrows even further. Look to the right here for a way up through more massive boulders and bush.

Next: a couple more hours of bush bashing and some travel on the river bed when possible. You can follow a faint track and cairns sometimes, other times just find your own way. Eventually, at a bend in the Routeburn North Branch, we crossed over it to the true right, climbing up towards North Col. We then had another even more difficult scramble up through bush and boulders. The way to avoid this would be to keep to the true left of one of the small streams feeding the North Branch, climbing on a narrow strip of land between the stream and the rocky hill on your right. At least, this is what seemed a better route from a vantage point I had after the worst was over.

When eventually above the bush you will likely meet snow at North Col. Depending on the conditions you might need ice axe and crampons because it does get quite steep in places. In December deep crevasses had formed at the edges of the melting snow. The snow was slushy for us and it was enough to have our ice axes out. But we saw that two guys before us had put on their crampons. (We met them on day 2).

There are a couple of camp sites at North Col on the north side of boulders, and sheltered a little from the north by constructed walls of stones. We were lucky and had calm conditions, but it could get pretty windy up there I presume. Our main problem were two kea that ate the handles of our walking poles. Keep everything soft in or near your tent!

From North Col we sidled around Nereus Peak, keeping at first on the same contour as North Col, then dropping down to flatter ground. (We actually stayed too high for too long and that slowed us down – it’s easier just to lose some ground after a while). From there you climb up again through boulders to a point where there are excellent views of Lake Nerine and Nereus Peak (just a little north of 1580m). You can drop down easily to the lake from there.

We wandered along the shore of Lake Nerine and then on to another large tarn/ small lake. From there you climb to point 1594m, and the views just keep opening up. From 1594m go west a little to drop down through a gut towards another big tarn. Go around this anti-clockwise. You have to cut back a bit to drop down to, and cross over an unnamed stream. From there an impact track and cairns guide you across steep tussock slopes towards Park Pass. I’d read notes that made this sound quite difficult but it wasn’t for us. Could be tricky in bad weather and low visibility however. You eventually meet the ridge and from there it’s easy travel to the tarn at Park Pass, where we cooked lunch in the shelter of a solitary boulder.

From Park Pass you can follow an impact track and cairned route down the valley. You have to cross at least some tributaries  of the Rockburn – gaiters and walking poles helped keep our feet mostly dry. Your basic route is on the Rockburn true left. My red line on the above topo map is pretty approximate in this section.

Eventually the loosely cairned route enters some bush on a hillside, and at this point you will see some blue tape trap markers, then some comforting orange DOC markers. You still have to find your own way across grassy plains but you pick up another quite well marked track to take you over a hill besides point 908m. Finally you are at Theatre Flat where you can expect to see a few other walkers staying the night. (There’s an excellent camp site next to a giant boulder, but we missed out on this and found another adequate spot by ourselves).

From Theatre flat head into the bush and the track will lead you to a bridge over the Rockburn. From there the track is mostly obvious all the way over Sugarloaf Pass back to the Routeburn Shelter. Nevertheless, in late 2022 there was a lot of windfall that required scrambling over and was tricky in one spot. There are also some more stream crossings in the Rockburn Valley and they could be knee deep, so you might get a bit wet.

The off-track navigation on this walk was difficult but made doable by a few cairns and some faint tracks. But we certainly took time with route finding, on day 1 especially. I found some notes online helpful in planning our walk, and these included Alice Adventuring, (walking clockwise), and New Zealand Tramper (walking anti-clockwise). I suspect that walking anti clockwise would make the trip through the hardest bush and boulders in the North Routeburn easier because you could navigate from up high. And you get to end with a leisurely stroll down the Routeburn Track.