When Sophia and I first started regular bushwalking we did the first half of this walk as far as the Ruined Castle. This is already a classic Sydney walk, but continuing on to the summit plateau of the stately looking Mt Solitary provides more great views, and the added satisfaction of a big day’s walking in fairly isolated country. Overnight walkers can continue further to traverse the mountain. END_OF_DOCUMENT_TOKEN_TO_BE_REPLACED
December 16, 2017 / Australia, Blue Mountains, cliffs, featured walk, Hard, Sydney, views
Porters Pass, Blackheath, Blue Mountains NSW

When you’ve done the spectacular routes on the eastern side of Blackheath at the top of the Blue Mountains, try the network of tracks on the western side for an alternative mix of Upper Mountains scenery. The views are a bit less extensive, but you get up close and personal with sheer cliffs frequented by rock climbers, pass through rainforest, dry forest and heath vegetation, and can visit a small but atmospheric canyon along the way. END_OF_DOCUMENT_TOKEN_TO_BE_REPLACED 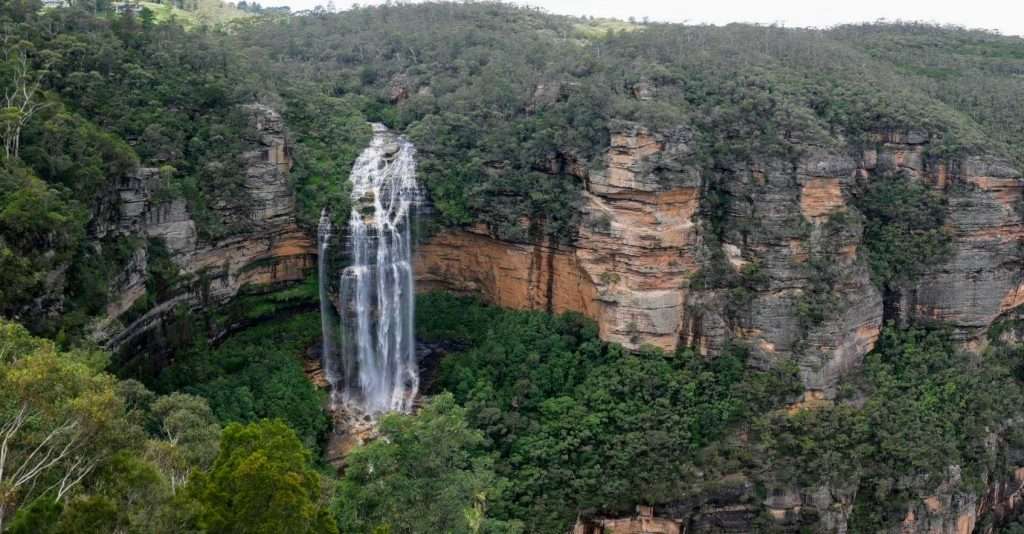 You can get good views of Wentworth Falls, in the Upper Blue Mountains, on three excellent circuit walks: via the National Pass, Wentworth Pass (no separate post for this), and via Hippocrene and Vera Falls. But if you want to see the falls in all their glory without much effort, then I can highly recommend the short walk down to Princes Rock Lookout from the Wentworth Falls picnic area. END_OF_DOCUMENT_TOKEN_TO_BE_REPLACED

This walk is conveniently located at the very bottom of the Blue Mountains near Glenbrook. Not all that spectacular, it’s nevertheless unique for the cave at the turnaround point, which contains excellently preserved indigenous hand stencils made with red ochre, hence the name Red Hands Cave. Walking from Glenbrook Causeway near the entrance to the national park, you’ll pass through a variety of forest types, from dry scrubby vegetation to rainforest, and the link track provides a bit of variety making a partial loop. END_OF_DOCUMENT_TOKEN_TO_BE_REPLACED

You can sample some of the best of the upper Blue Mountains on this harder than average circuit walk near Blackheath. You get the usual grand valley and cliff views, but also numerous waterfalls, rainforest, and creek scenery. And you can combine the Rodriguez Pass with the Grand Canyon Circuit (as we did) to make a full and varied day of it. END_OF_DOCUMENT_TOKEN_TO_BE_REPLACED