Views over golden hills and into the Wakatiu Basin on this walk from Coronet Peak ski field to the summit (1650m) & then to Brow Peak (1456m).

I’d climbed Brow Peak (1456m) twice from Arrowtown, and it was one of the better walks I’d done, especially in nice lighting. I knew the route continued to Coronet Peak (1650m), and on Christmas Day my wife Sophia and I decided to fit this into the morning before a Christmas date with neighbours in the afternoon.

Walking through the ski field to the summit of Coronet Peak was not the best experience, but the views are excellent once at the summit. And then the ridge walk to Brow Peak is a much wilder affair, being free of ski apparatus. And as open tussock grass country you get views the whole way, over the Wakatipu Basin and rugged slopes on the southern side of the ridge, and numerous golden hills and valleys in all other directions.

We actually had to turn back before we reached Brow Peak as we were running out of time, but having visited here twice before I was happy that I knew what to expect. You can see my photos from this alternate approach to Brow Peak in both summer and winter. Track notes at the end. 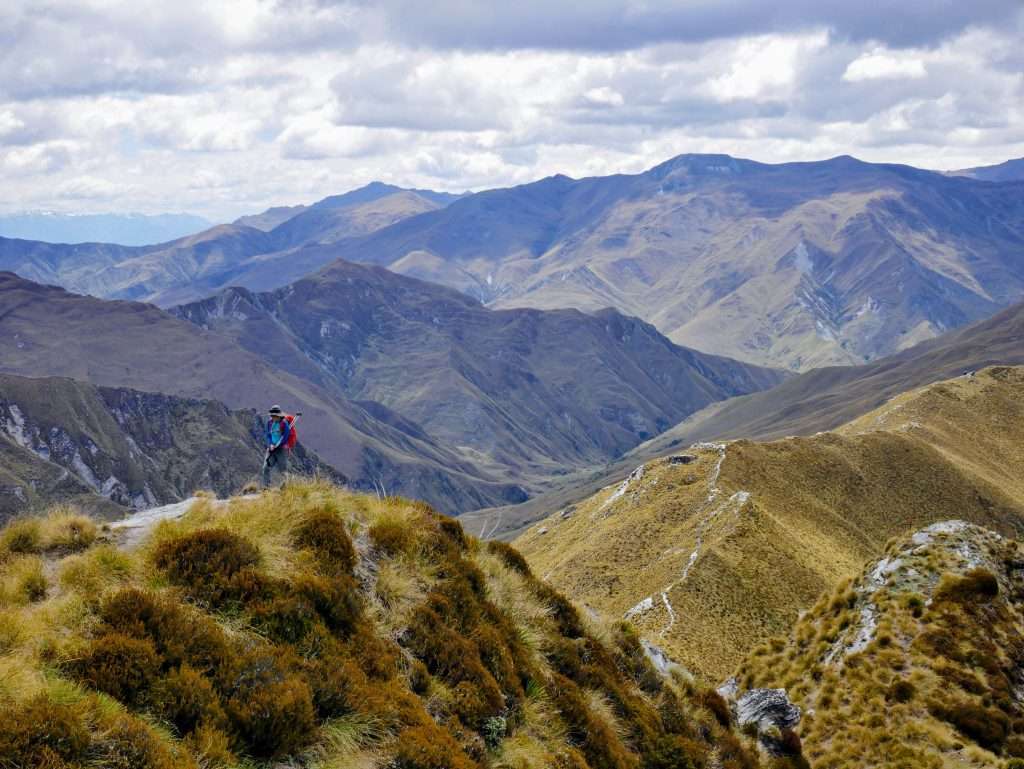 There is a designated hiking route up from the main ski building to the summit of Coronet Peak, although we couldn’t find the start that easily and ended up using the uphill access vehicle trail until we came across signs for the hiking trail about half way up. There are signs at the main building showing this route as well as various MTB routes on the mountain.

From the summit of Coronet Peak the route is at first unmarked, but you just have to make your way onto the obvious ridge. Once on the ridge there is a big sign showing the start of the intermittently poled route to Brow Peak. There are a few crags to get around when leaving Coronet Peak but nothing too difficult. On the return leg we cut a corner to roughly follow MTB tracks back to the ski field.

We under estimated the time required for the whole walk: I reckon you’ll need a short day to complete this walk in total. We thought a half day would be enough. And if you want more info on activities you can do on Coronet Peak in summer then have a look on their summer website.

After looking at the topo map for the area I realise there is a way down to Arrowtown from Coronet Peak and so it would be possible to start at Arrowtown and complete a large loop taking in Brow Peak – one for next time I guess.