This long but reasonably straightforward walk takes in three peaks in one day, each of them offering 360 views of the surrounding alpine plateau and further afield. The area feels fairly remote, but is only a 45 minute drive from Hobart.

The area west of Hobart known as Wellington Park is an alpine plateau that contains a number of accessible peaks over 1000m of elevation.The walk depicted here takes in three peaks in one day – Collins Bonnet (1246m), Trestle Mountain (1160m), and Collins Cap (1098m). The walking is mostly through forest or woodland, but you pass through the tree line on the way up each mountain, which provide unobstructed and quite extensive views of the protected area and beyond. The initial climb is through attractive rainforest where the tree ferns are flourishing.

Although it’s a long walk with 1200m change in elevation, the views to walking ratio is good, as no sooner have you left one peak when you are on your way up another. You can of course climb any of these peaks as one walk. Although Collins Bonnet is the tallest of these mountains, I quite liked the view of Collins Bonnet from Trestle Mountain, which I also thought had the most interesting summit, and the views from Collins Cap were excellent too. Trestle Mountain is the furthest of these peaks from the start point on  Myrtle Forest Road, about 45 minutes drive from Hobart. Track notes at the end. 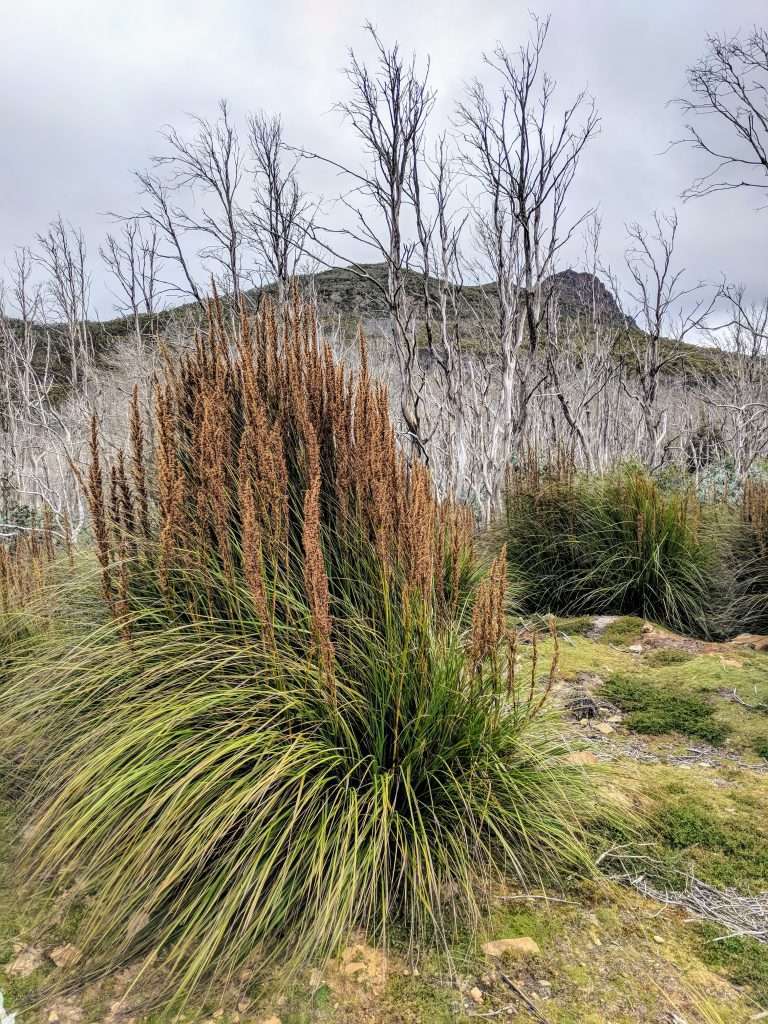 As for all of our Tassie walks so far we used the track notes in  Tasmanian Day Walks. I couldn’t find anything online describing the walk up all three peaks, so I’ll summarise the walk below. Our track notes described the walk in a clockwise direction. This link to google maps roughly centres between the three peaks, and shows the various fire trails that comprise most of the walking between the three mountains (although there are only walking tracks up to each of the summits, and these are not shown, but the turn offs are pretty obvious when you are there).

The start of the walk is pretty straightforward, walking up Myrtle Forest Road to the picnic area, then ascend along a track through forest, keeping left at a junction signposted to Collins Cap (which is the return route). Go left again at the fire trail (East West Trail), then after a hut you’ll see a signposted right turn up to the summit of Collins Bonnet on a walking track.

Retrace your steps onto the fire trail, turn left to go back down this, and stay on it, passing a junction on your right (which is the way to Collins Cap – remember this for later), and walk on to another junction and clearing. Go straight ahead through the clearing (leaving the EW Trail which turns left), and follow a track for a while until you meet the EW Trail again. Turn left back onto the EW Trail, but only very briefly, turning right onto a walking track to the summit of Trestle Mountain.

Retrace your steps taking a left onto the EW Trail, then soon right, and back along the track to the clearing where you rejoin the EW Trail. Continue back down this until that left turn to Collins Cap, which is along the Collins Cap Trail. You eventually turn left off this trail onto a walking track to the summit. Retrace your steps to the Collins Cap Trail, and almost opposite (a little to the left) is the track (a right turn) leading down to the junction you encountered near the start, where you turn left for the final descent.