A thousand metre off-track climb to the summit of Purple Hill (1680m) rewards with great views of Lake Pearson and the Craigieburn Range.

If you’ve driven out to Arthur’s Pass from Christchurch then you’ve passed Purple Hill (1680m), a fairly imposing mound that looms above Lake Pearson as you approach from the south-west. It stands alone, so I expected good views from the summit, and wasn’t disappointed. The pointy (-ish) summit itself is fairly rugged, with long and colourful scree slopes to the west, so it was a fun one to visit. At a little over 1000 vertical metres to the top, and no track, it requires some fitness, but is well worth the effort, and navigation was straightforward.

Track notes at the end. (Note that this walk is on private land and permission is required to access it. We didn’t know that, and I explain more in the track notes section.) 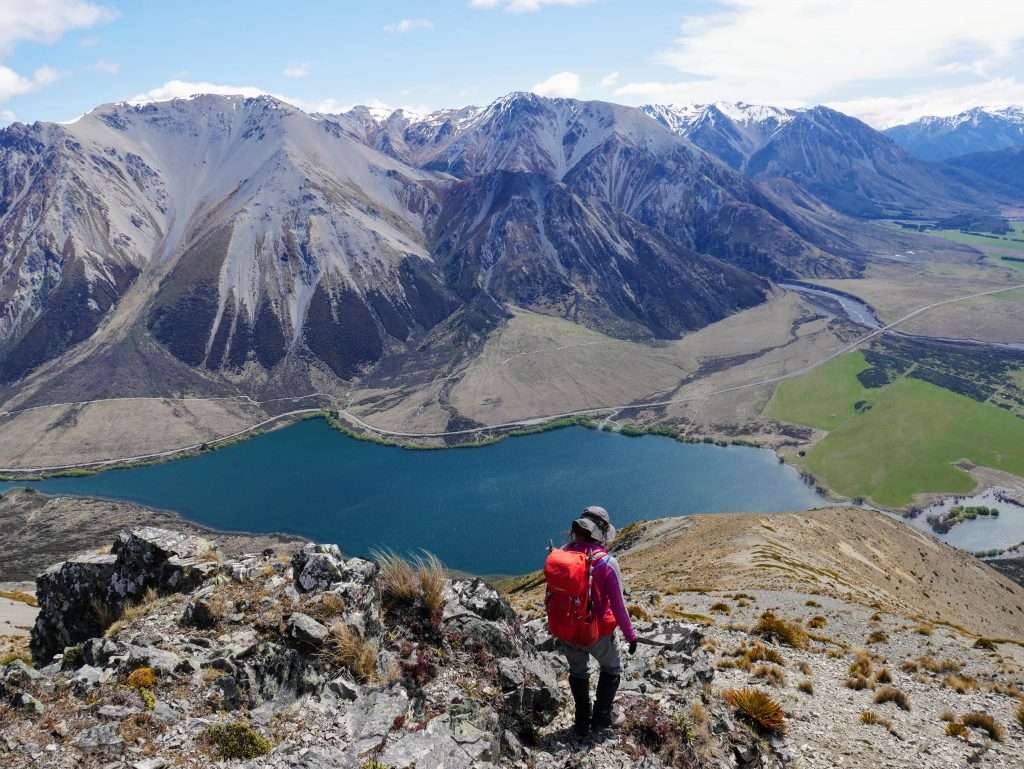 Purple Hill is entirely on private land, and although I’d read twice that permission was not required to access this land, two other trampers we met that day had encountered the farmer and been told that they should have asked for permission. It looks like ownership changed a few years ago and so these other notes are now out of date. I believe the land is managed by Craigieburn Station, but I don’t know their contact details. What looked to be fairly unreliable information online showed their number to be 03 318 8618, but I’ve not tried to call. Perhaps you can let me know if you work it out and I will update these details.

The walk starts from Lake Pearson Campspite at the northern end of the lake. From there you head north-east with the lake on your right, walking a short way down a vehicle track and crossing over a stile near a hut. You then walk along a fenceline, hugging the lake shore more closely, until you come to a swampy section of land at the very northern extreme of the lake. It’s then along the fenceline some more and over the fence towards Long Hill Saddle. You cross the fence once more and head straight up the hill, meeting the north-western spur, and following it up to the summit. The section around the lake is a little cumbersome, but it’s an easy if rather steep climb from there until higher up the mountain, where the gradient eases.

I’ve read that it’s possible to return via a long scree run and the lake shore to the west, or even swimming over the lake at it’s narrowest point, but I think returning the way you came is an easier option.

Our second time to do this classic Canterbury tramp, this time in a bit of snow: Castle Hill Peak (1998m) via Foggy Peak (1741m).

I first did this classic Canterbury walk up Castle Hill Peak (1998m) via Foggy Peak in autumn, not long after I had arrived in Christchurch (that post here). On that snowless day there were gale force winds and the final ascent to the summit felt rather adventurous. I had wanted to return and repeat the walk in snow because I’d read that it made for good winter tramping. The Torlesse Range captures and holds a fair bit of snow, so I waited until a sunny day in early spring to do this, having so many good new walks to do over the winter. END_OF_DOCUMENT_TOKEN_TO_BE_REPLACED

Rugged scenery as you ascend to Ben More (1655m) along broad ridges on this circuit walk in Korowai/Torlesse Tussocklands Park. 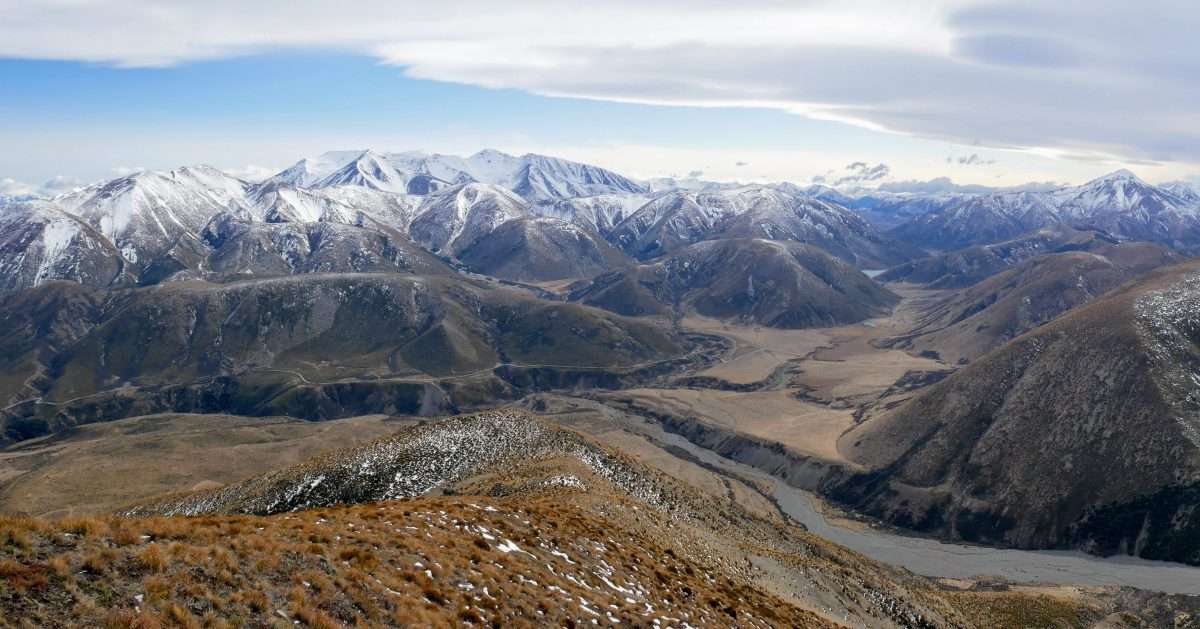 I’d heard this circuit walk along the tops of Ben More, the high point of the Big Ben Range in Korowai/Torlesse Tussocklands Park, was a good winter tramping option, with safe enough travel for those less experienced in snow. By time we did the walk in early spring there’s wasn’t much slow left, but enough to add to the aesthetics of the area. However I think the rugged scenery would look good in any season. END_OF_DOCUMENT_TOKEN_TO_BE_REPLACED

Excellent gorge scenery and grand mountain vistas await you on this moderate walk to Woolshed Creek Hut on the western side of Mt Somers.

With severe gale force winds forecast for the mountains on a sunny Saturday in late winter I thought it best we avoid exposed ground, and opted instead for this circuit walk to Woolshed Creek Hut near Mt Somers. Being at lower elevations I did not expect so much from the walk, but it very much exceeded expectations. We did the loop anti-clockwise and climbed up to 1100m on the Rhyolite Ridge and Bus Stop Tracks, with excellent views towards the distant but spectacular Arrowsmith Range, and also of the nearby Winterslow Range. Once near the hut there were narrow and rugged gorges with waterfalls and bluffs aplenty. Great stuff. END_OF_DOCUMENT_TOKEN_TO_BE_REPLACED

Great views in all directions as you climb to the accessible high peak of Mt Cloudsley (2107m) in the Craigieburn Range near Castle Hill. 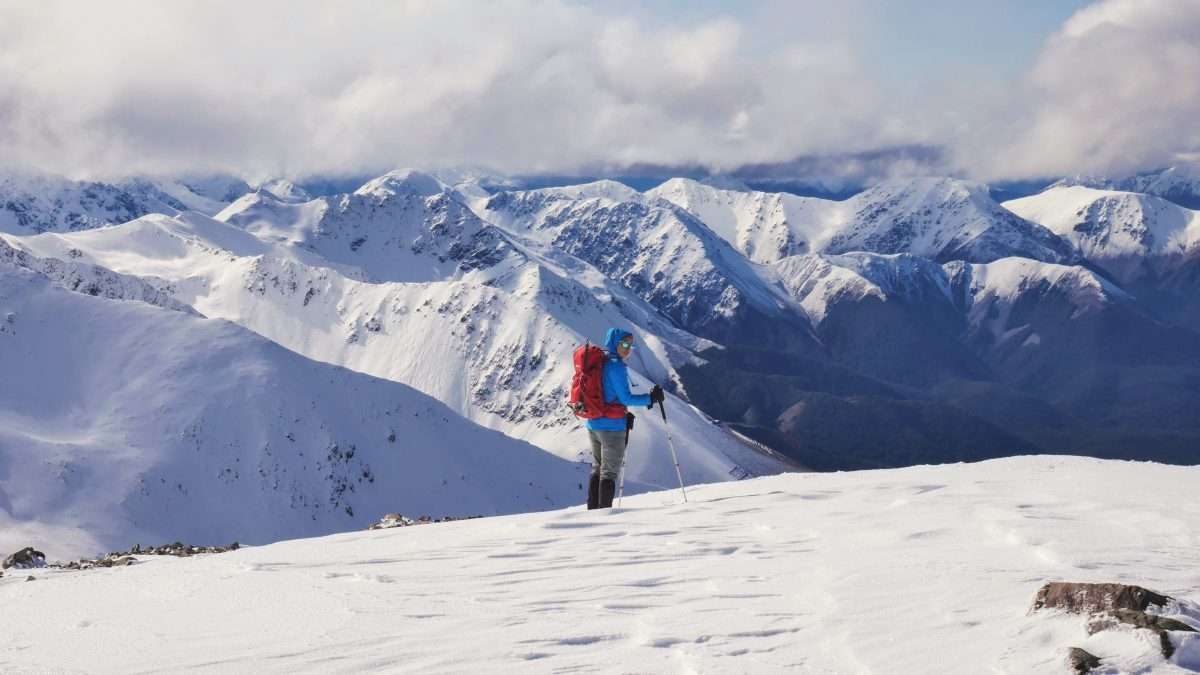 This was my first time to climb a 2000 metre high peak from the bottom (the bottom being at 760m in this case), and was also the highest I’d climbed in New Zealand.  Despite these numbers it is a fairly straightforward climb up Long Spur to the summit of Mt Cloudsley (2107m), the second highest peak in the Craigieburn Range. It made for a great winter walk after some fresh snow, with views along the Craigieburn Range and over to the Torlesse Range, and from the summit, views south-west over a jumble of topography around Lake Coleridge, and north-west towards numerous peaks in the Southern Alps. END_OF_DOCUMENT_TOKEN_TO_BE_REPLACED 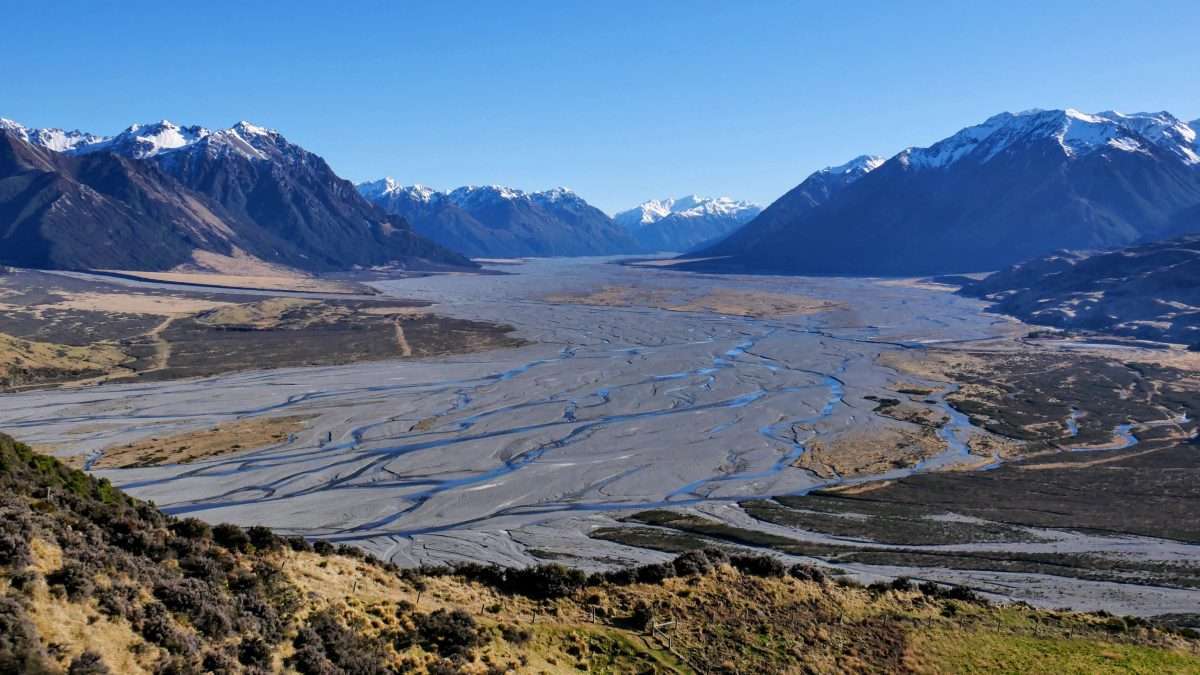 I got quite excited when first reading about this somewhat challenging tramp up Mt Oakden (1633m), and it did not disappoint. The mountain’s position at the foot of the braided Wilberforce River provides epic views straight up this valley, and these were a real highlight for me. Added to this are excellent views up the Harper Valley, of the Rakaia River, Lake Coleridge, and countless peaks in the Southern Alps. Do it on a clear day for maximum effect. END_OF_DOCUMENT_TOKEN_TO_BE_REPLACED

Really excellent views over the braided Rakaia River and countless mountains on this big ascent up Steepface Hill (1876m) in Hakatere Conservation Park.

Since moving to Canterbury (NZ) in Autumn 2020 I’d had my eyes on Mt Hutt (2185m), the high point of a prominent mountain range bordering the Rakaia River. This would be a big walk with limited winter daylight hours, so a good plan B was to first climb a peak at the northern end of this range, Steepface Hill (1876m): a 1500m vertical climb over just four kilometres, and the only ridge on the route up is mostly flat. It’s all in the name! It’s not all about the steepness though, because the views of the Rakaia River and countless surrounding peaks were just fabulous. Also very cool was Terrible Gully at the start, a rather jagged waterway cut out of the hillside. END_OF_DOCUMENT_TOKEN_TO_BE_REPLACED

A 1000m climb through a variety of native vegetation takes you to the summit of Little Mt Peel (1311m) with great views of the Canterbury Plains & surrounding mountains.

One of Canterbury’s more popular walks, climbing Little Mt Peel takes you 1000m up through a variety of vegetation types, including podocarp and broad leaf rainforest with a variety of ferns, then native bush, and finally into heath and tussock. The views from the summit are very good, including the Canterbury Plains to the east, and various hills and mountains in all other directions. END_OF_DOCUMENT_TOKEN_TO_BE_REPLACED

Top class 360 degree views of numerous mountain ranges and the Waimakariri Valley from the summit of Mt Bruce (1630m) in Craigieburn Forest Park. 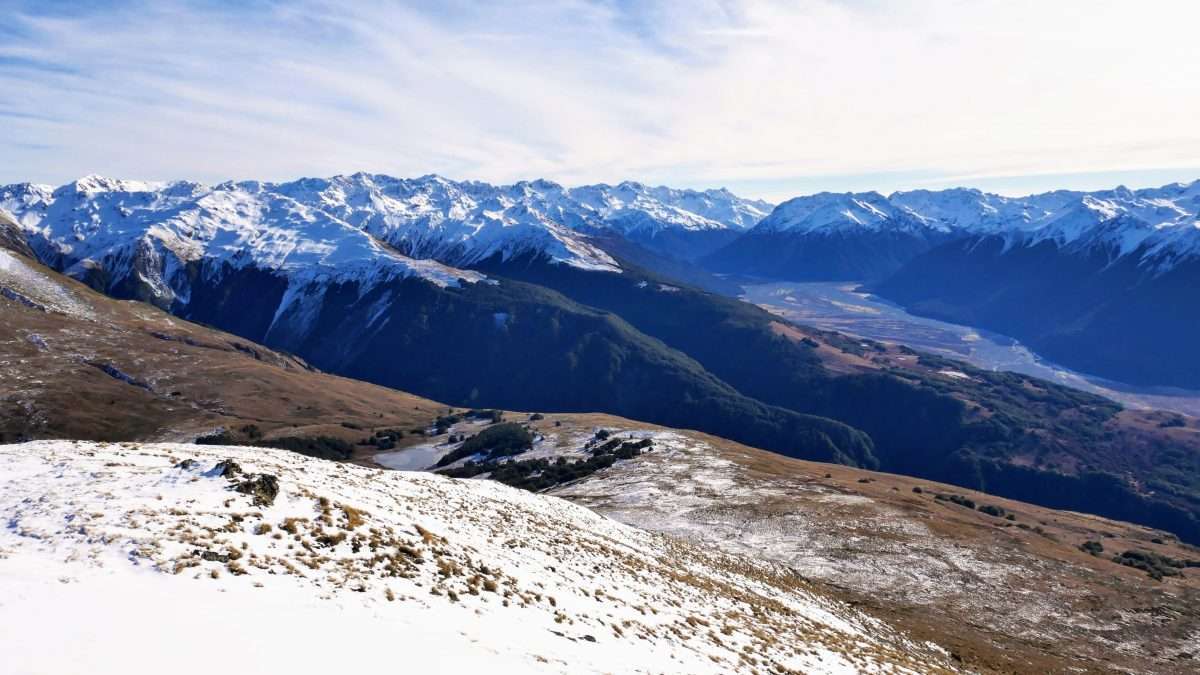 I’d heard good things about the views from Mt Bruce (1630m) in Craigieburn Forest Park, and I was not at all disappointed! Spectacular 360 degree views await you at the summit, but there’s plenty of interest for much of the walk. There’s nice forest at the start, already good views on the tracked section, then ever improving views as you climb to the summit.

From the summit you overlook big-ass mountains in the the Southern Alps, numerous peaks around Arthur’s Pass, the wide open Waimakariri River Valley, and colourful patchy mountains of scree, tussock and forest elsewhere in Craigieburn Forest Park. You can also see the long thin forms of Blind Spur and Bealey Spur, the latter offering another good walk in the area that we have on our to-do list. Making a loop by returning eastward along an attractive ridge will top it all off. END_OF_DOCUMENT_TOKEN_TO_BE_REPLACED

This circuit walk up Mt Harper (1829m) offers wide open views of the Ashburton Lakes District & the Rangitata River, with the Southern Alps providing the backdrop.

With a forecast of cloudy weather to the north and west of Canterbury this walk up Mt Harper (1829m) in the Ashburton Lakes District was a plan B. It turned out to be one of the best walks we’ve done, with fabulous views in all directions. There’s variety in the views as well, with rugged snowy peaks, lumpier mountains, wide plains punctuated with shallow lakes, and the Rangitata River Valley. The overall impression is of remoteness, which I always like on a walk. END_OF_DOCUMENT_TOKEN_TO_BE_REPLACED