A 1500m ascent to the summit of Mt Bogong (1986m) provides excellent alpine views and a pretty decent workout!

Mt Bogong is Victoria’s highest mountain at 1986m of elevation, and is apparently Australia’s highest freestanding mountain. There’s no road to the top, so if you want to summit the mountain and see the excellent views you have to climb it from the bottom, a satisfying 1500m ascent along a well marked track up either the Staircase Spur or Eskdale Spur. END_OF_DOCUMENT_TOKEN_TO_BE_REPLACED

The short Chalwell Galleries Track winds around and between massive boulders high up in Mt Buffalo National Park. 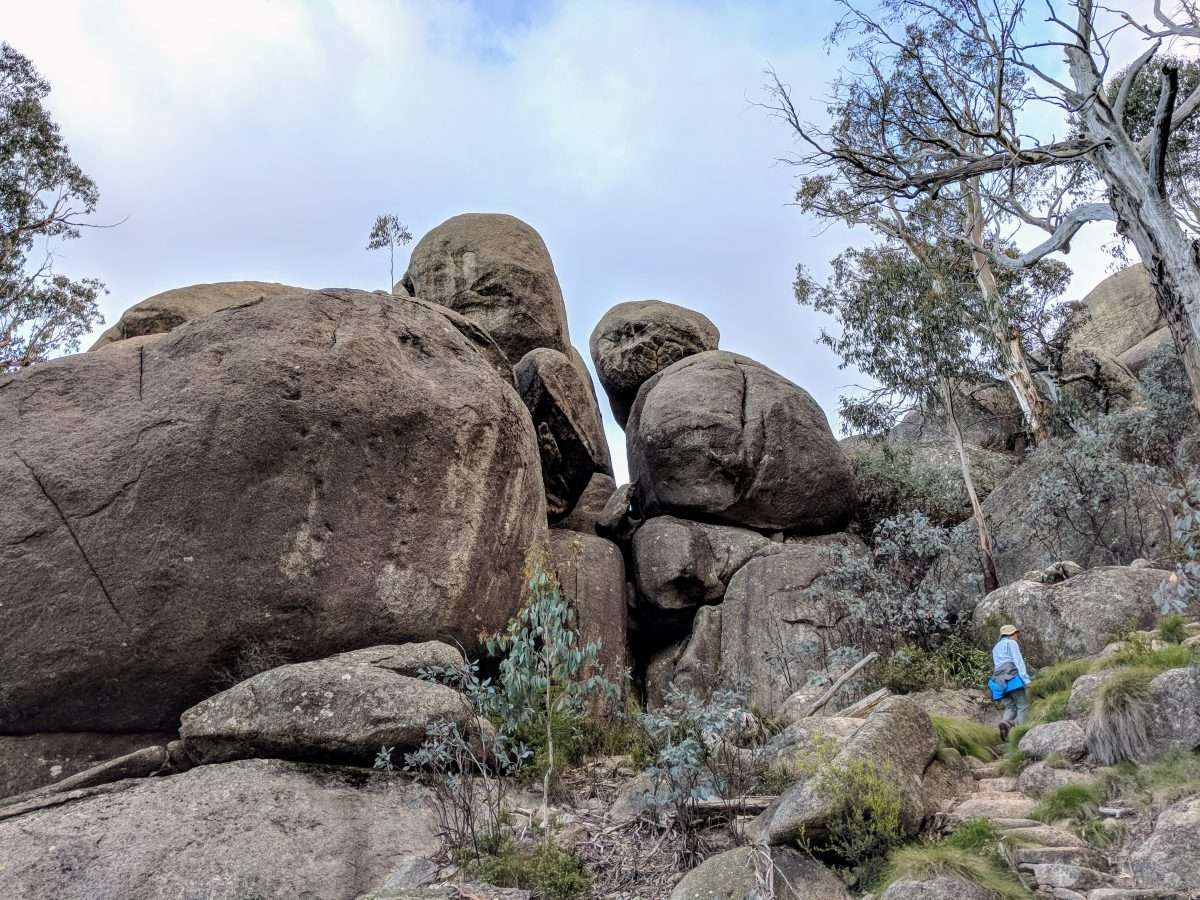 This was our third short walk on the Mt Buffalo plateau, this one a short side trip off the main road, and a bit different than the other two (The Horn and The Hump). It wound around and between massive boulders, and required just a bit of scrambling. More info on the Parks Victoria website. END_OF_DOCUMENT_TOKEN_TO_BE_REPLACED

Another good short walk high up on the Mt Buffalo Plateau, The Hump (1695m) provides great views over to the Horn, and you pass a large triangular shaped hunk of rock called the Cathedral. 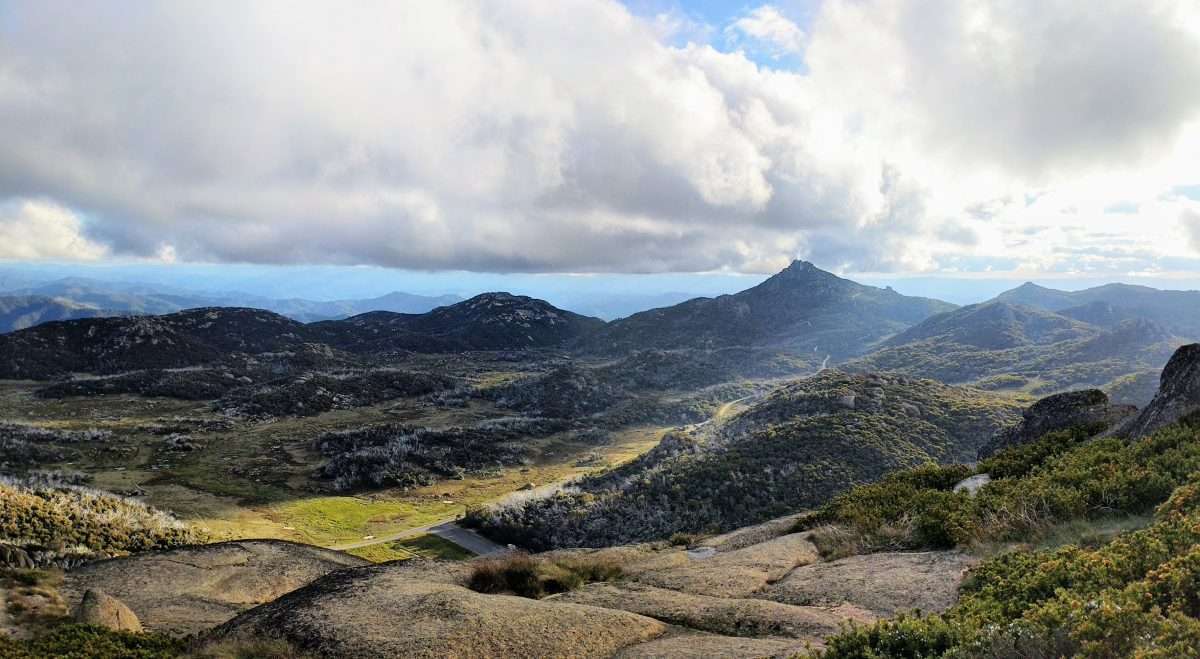 The second of three short walks we did after the Big Walk, climbing the Hump from a small car park on the road up the mountain offers excellent views of the the slightly higher Horn (1723m), a nicely shaped lump of rock called the Cathedral, and the surrounding alpine plateau. More info on the Parks Victoria website. (We also did two other short walks nearby – The Horn and Chalwell Galleries tracks). END_OF_DOCUMENT_TOKEN_TO_BE_REPLACED

The Horn is an easy walk (with a bit of climbing) to the highest point of Mt Buffalo (at 1723m) for great views in all directions.

A short walk to the highest point of Mt Buffalo, The Horn (1723m) provides excellent views of the plateau to the west, and various mountains  in other directions. It’s situated at the end of the road up the mountain and so is easy to find. More information on the Parks Victoria website. (We also did two other nearby short walks: The Hump-Cathedral and Chalwell Galleries Tracks). END_OF_DOCUMENT_TOKEN_TO_BE_REPLACED 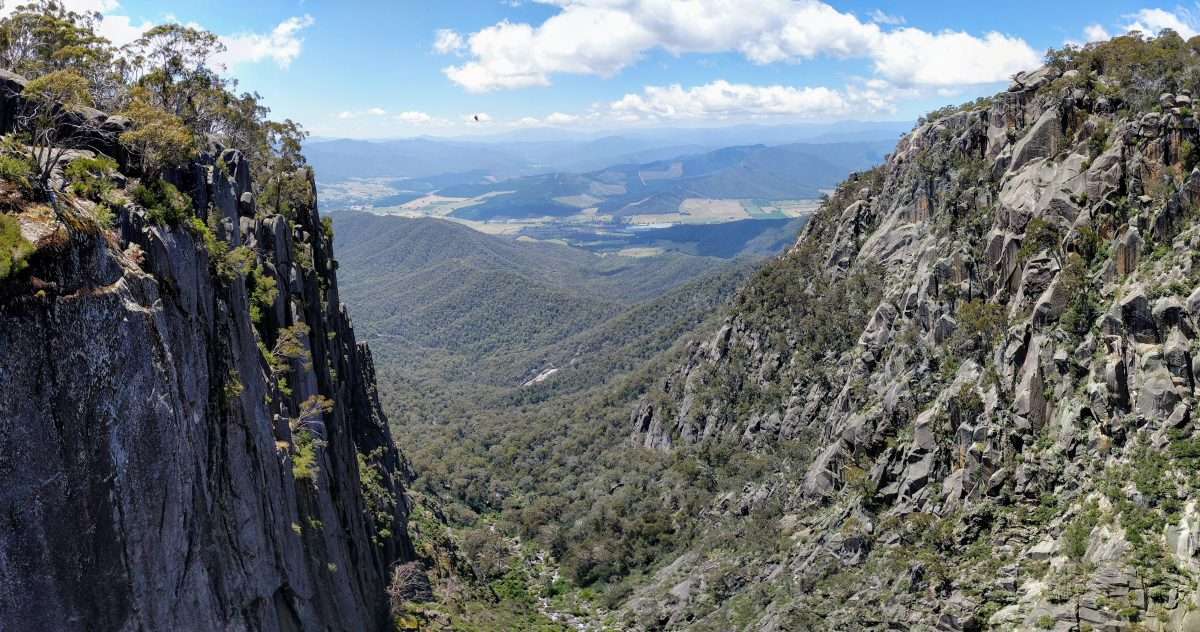 When we climbed Victoria’s second highest mountain, Mt Feathertop, I saw a big hunk of a mountain in the distance and thought “we should really go there this holiday”. Well, we did, and it was grouse (as the Victorians say). The mountain is called Mt Buffalo, after its shape, and the pictures below are of the longest walk in the park, the so called Big Walk, but we also did three short walks higher up on the plateau after we finished – The Horn (which looks like a horn), The Hump, (which looks like a hump), and the Chalwell Galleries. All offered excellent views (especially the first two). This walk starts at the bottom of the mountain and rises about 1000m to 1350m of elevation. At the end of the walk are spectacular views of the Gorge (which is a gorge), particularly the very sheer and massive North Wall (which is the wall on the north side of the Gorge). Clearly very little mental effort was expended when naming the parts of this national park. END_OF_DOCUMENT_TOKEN_TO_BE_REPLACED

The moderate walk to Mount Tabletop passes through a variety of alpine vegetation, and there are good views from the summit plateau. Lots of wildflowers at the end of December when we went. A nice atmospheric walk.

The Mount Tabletop track is good way to experience Victorian High Country scenery for only moderate effort. There’s grassy plains, forests of snow gums, wildflowers in summer, views from the summit plateau, and even attractive flies. In fact quite a few flies in general (in summer). The walk is accessed on the Great Alpine Way past Mt Hotham village on the way to Dinner Plain. END_OF_DOCUMENT_TOKEN_TO_BE_REPLACED

Climbing Mt Feathertop along the Bungalow Spur Track involves a steady 1440m ascent over 11km to the summit at 1920m of elevation; the second highest point in Victoria. You climb from lush forest through mountain ash and snow gums, then into alpine meadow up to the summit, where there are extensive views over the Victorian high country.

I find climbing steeply up 1000+ vertical metres to the top of a pointy mountain very satisfying. So when I read that climbing Victoria’s second highest mountain involved a 1440m vertical climb over 11km I thought it justified our first bushwalking trip to Victoria. And the reports I read about Mt Feathertop promised a pointy summit; now, it is by mainland Australian standards, but if you’ve hiked in NZ or Tasmania, (or almost anywhere else in the world), then you won’t find it particularly pointy. You steadily climb up through lush forest at first, into mountain ash woodland, then snow gums, and finish in alpine meadows. The views extend over the Victorian high country, and inspired me to visit Mt Buffalo a couple of days later, which  I could see from the summit, and looked great. (I had to work out where this was on the map.)  END_OF_DOCUMENT_TOKEN_TO_BE_REPLACED