One of my favourite Sydney walks that I’ve done multiple times, the Burning Palms Circuit from Otford takes in excellent coastal scenery in the Royal National Park, and passes through a unique and atmospheric palm jungle. Definitely one of my recommended walks in the area.

I’ve done the Burning Palms Circuit multiple times, and it remains one of my favourite walks around Sydney. It starts at Otford on the edge of the Royal National Park, and you soon pass by steep coastal cliffs, descend into a palm jungle, pass through grassy plains, then arrive at the very picturesque Burning Palms Beach, backed by the beginnings of the Illawarra Escarpment. There were very choppy seas on the day I took these pictures (…and I’ve now put a few extra pics at the end from a different day just a month later).

It also provides access to the popular tourist attraction Figure of Eight Pool, but for some reason I’ve never been and so I can’t include a photo (there’s plenty online – its a rock pool in the shape of an 8). The circuit track then climbs up the escarpment to Garrawarra Farm car park, (where you can actually start a shorter version of this walk; track notes here and here), and passes along the top of the escarpment back to the start.

The outward leg forms the end (or beginning) section of the 27-30km Coastal Track, which I’ll post on later (we’ve done that twice in recent years). Track notes at the end. 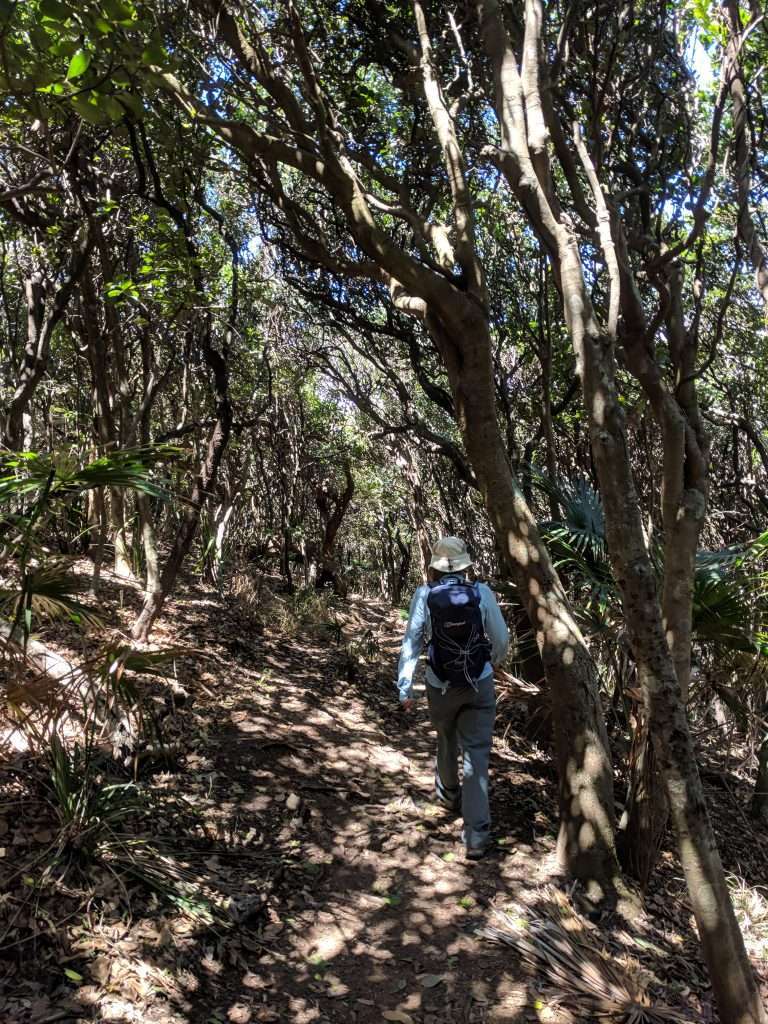 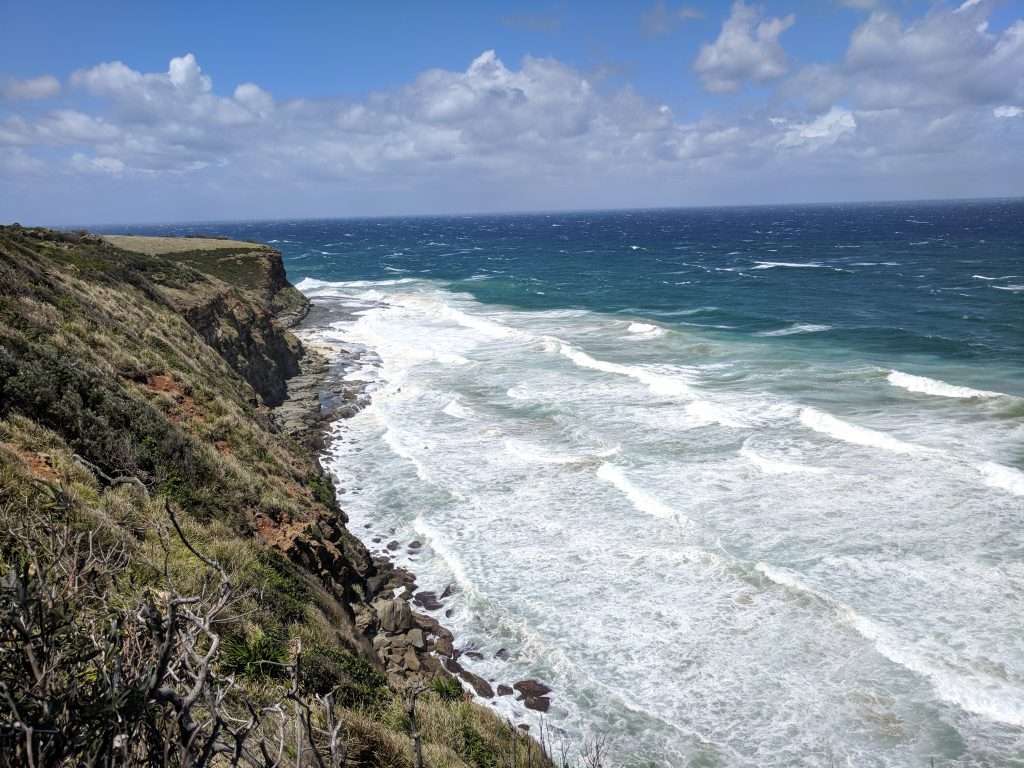 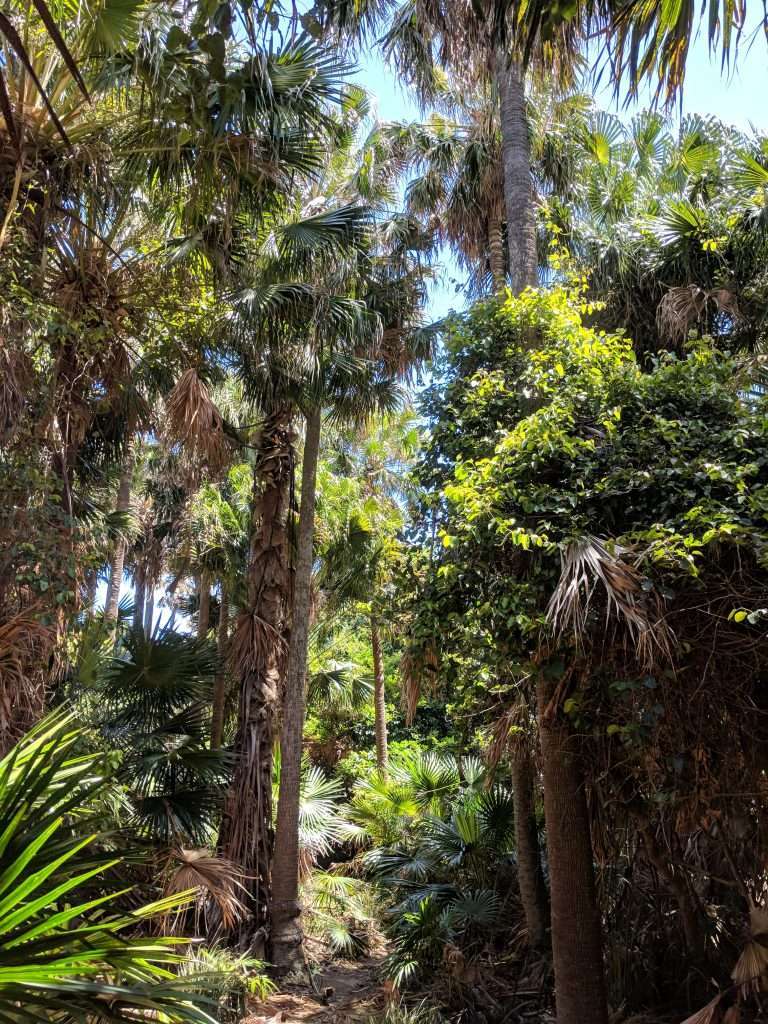 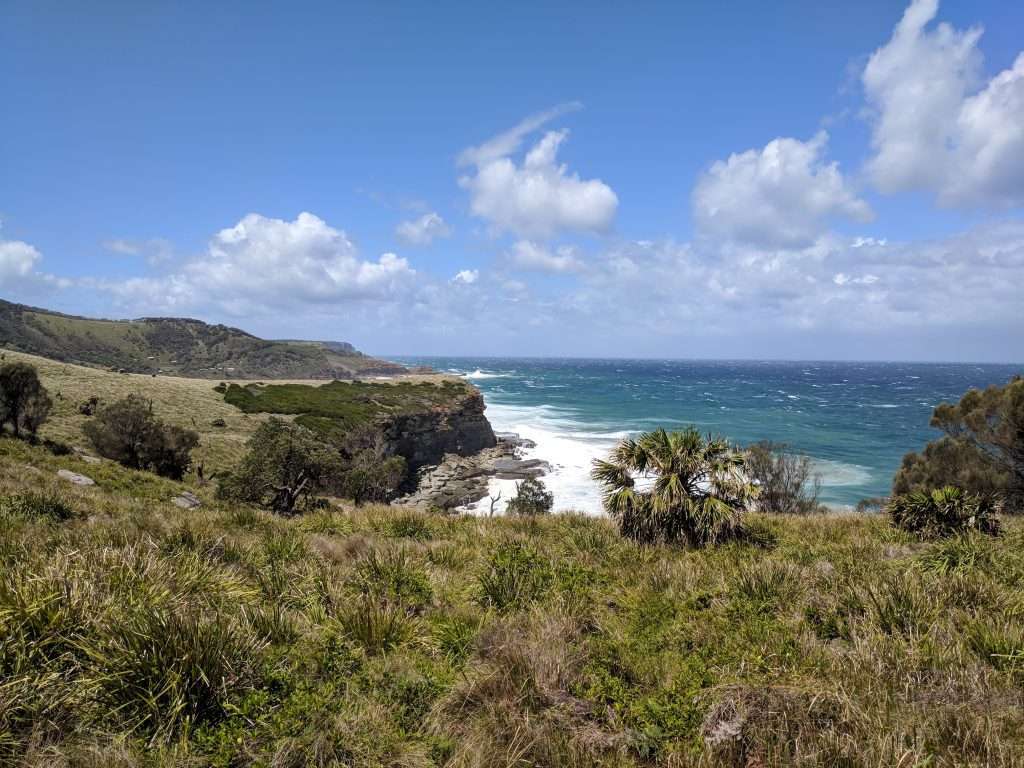 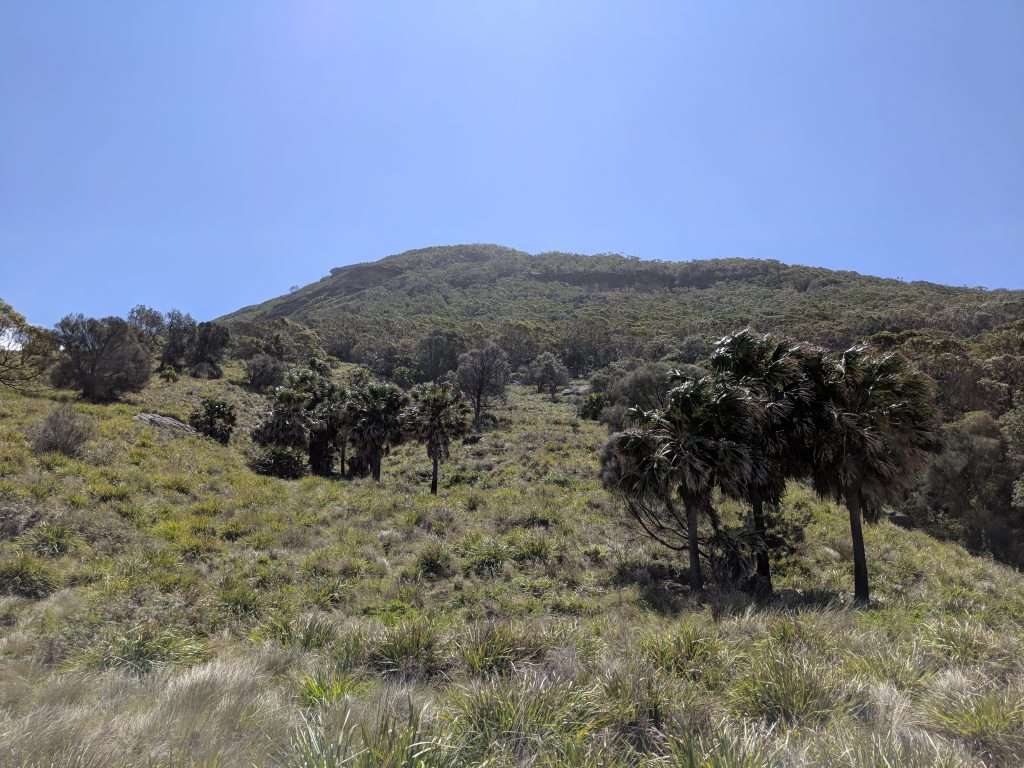 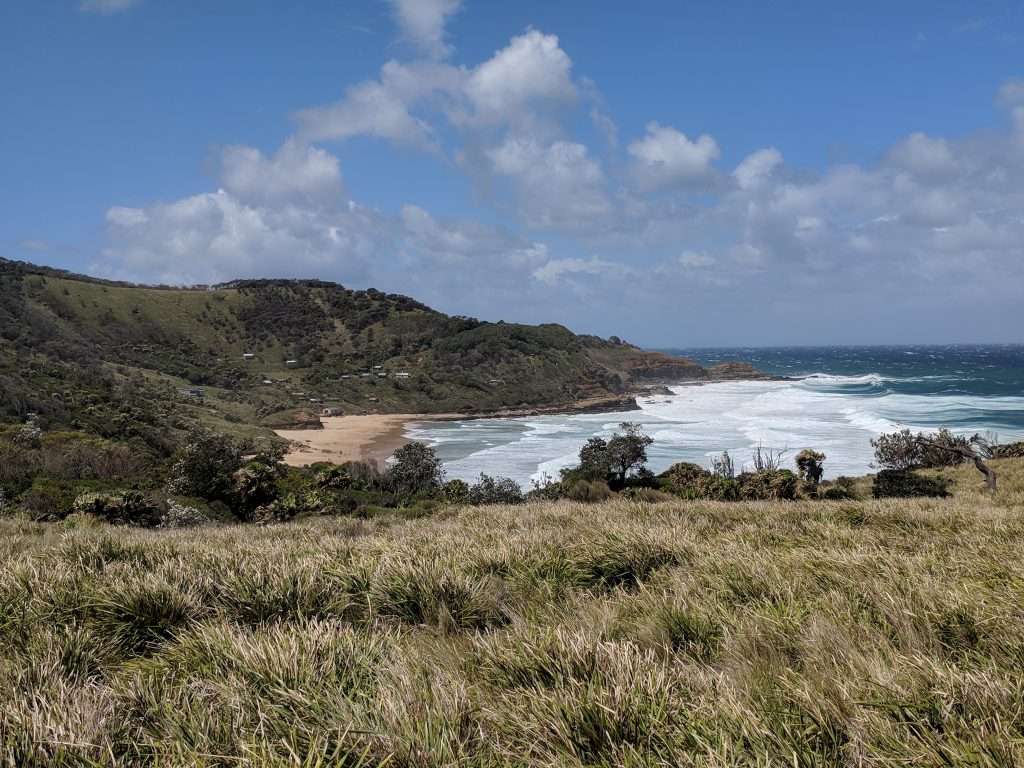 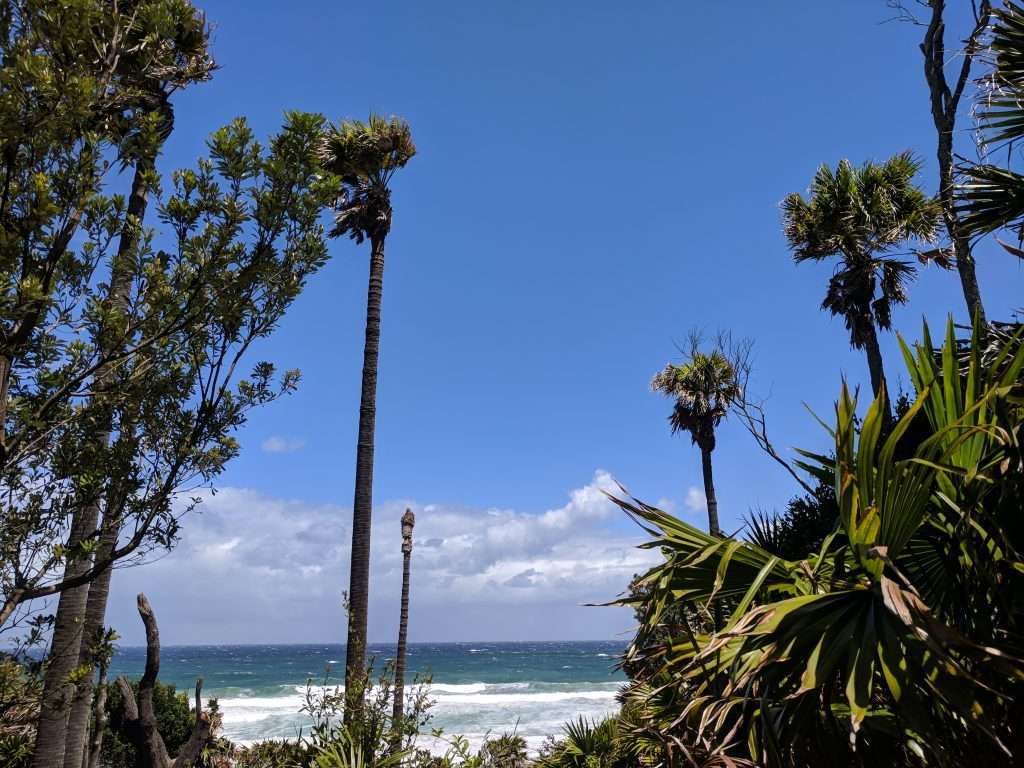 A few extra pics from a month later when my sister in law, who was visiting from overseas, asked to do this walk again. No particular order. 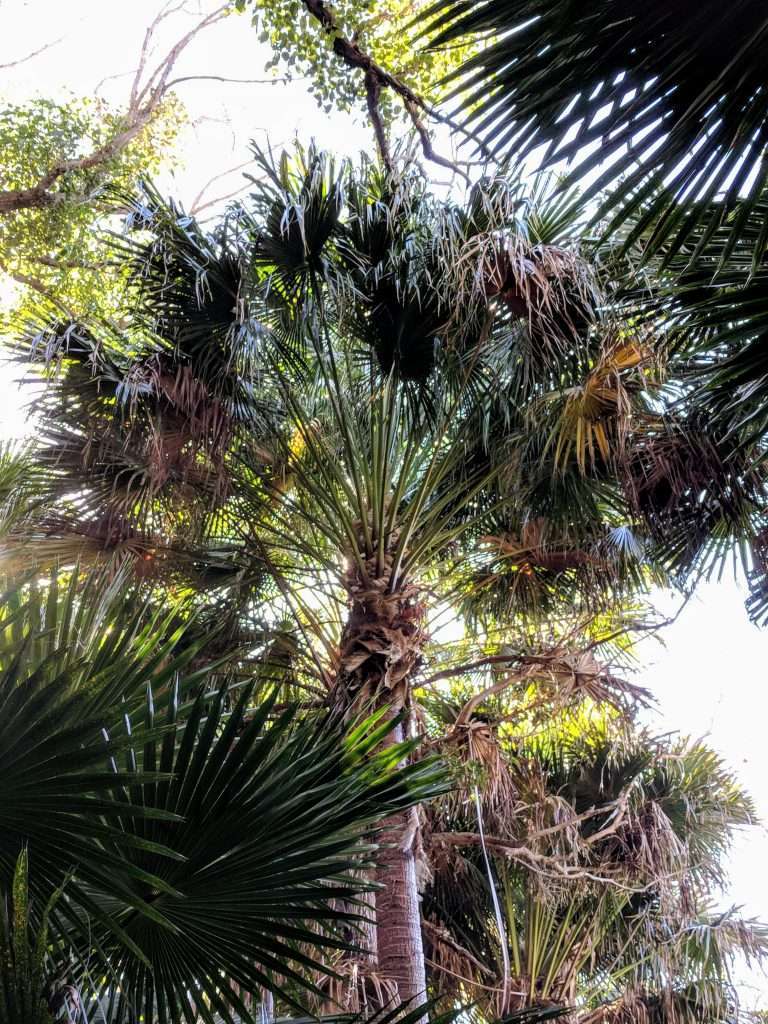 We’ve used A Day in the Bush for track notes, and the walk is also on the Beyond Tracks website. I think doing it anti-clockwise is best. There’s also the shorter version I mentioned above, but this misses the bit from/to Otford Lookout, which is a nice section.  The summary is: walk from Otford Lookout to a signposted right turn about 30 minutes in (give or take), which then takes you down to the coast. Kepp walking and at Burning Palms Beach you climb up through the heritage huts from the depression era, taking a left on the ridge crest to follow this ridge to Garrawarra Farm Car Park, turning left just before the car park, and follow this all the way to the start (passing that right turn (now on the left) that you took 30 minutes in).